And I'm Audie Cornish. Today at noon, America's oldest working clock tower rang out for the first time since the 1800s.

CORNISH: Old South Meeting House in Boston was a Puritan gathering place. Ben Franklin was baptized there and the Boston Tea Party was planned there, but the belfry has been silent since 1876, after the brick building was nearly destroyed in the great Boston fire.

Today, that silence came to an end and Curt Nickisch of member station WBUR was there.

CURT NICKISCH, BYLINE: When the last strike reverberated away into the sound of raindrops on the roof above, David Hochstrasser breathed a sigh of relief.

DAVID HOCHSTRASSER: No one alive has ever seen this clock actually strike a bell. I had a lot of doubts and a lot of worries along the way.

NICKISCH: He's been hooking up the 1766 power clock to ring the bell on the hour ever since the bell was raised to the belfry a few weeks ago to fanfare. A choir sang as a crane gently lifted the 876 pounds of cast iron into the clock tower.

NICKISCH: In the crowd below, Mary Holland craned her neck and camera.

MARY HOLLAND: It was very exciting to see and it seems a little hokey, you know, like we're grown up and we are jaded now, but it gave me, like, goose bumps. This is our history. This is America. You know, the Revolution. It was really cool, you know.

NICKISCH: Really cool because this bell was cast in 1801 by Paul Revere. It's been hanging in a church in the Boston suburbs, an old Baptist congregation, but the church recently closed and the remaining members, including Joanne Nelson, agreed to let Revere's bell go.

NICKISCH: And so it did for the first time today. James Storrow's heart swelled with pride.

JAMES STORROW: It felt like something I was put here to do.

NICKISCH: He's from an old, wealthy Boston family and donated the money to install the bell.

STORROW: I feel my ancestors patting me on the back, saying, good job. And that's not a feeling I'm used to.

NICKISCH: It's also a new feeling to hear Paul Revere's bell ring out from the Old South Meeting House. He's believed to have taken part in the Boston Tea Party here. The silversmith used his engravings to foment revolution. Later in life, after this country was founded, he turned to casting bells. Now, this one rings on the hour over Boston, a symbol of peace, democratic order and freedom. 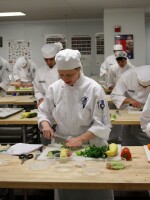