A senior delegation from the International Atomic Energy Agency visits Iran on Sunday in a renewed attempt to probe aspects of Iran's nuclear program that could be connected to nuclear weapons work.

For years, the IAEA has been trying to get answers to some very uncomfortable questions about Iran's nuclear program.

Iran insists it has only a peaceful, civilian nuclear program, and so far it has refused to discuss evidence that it is engaging in some nuclear weapons work. But international pressure on Tehran is growing.

The Iranians have dismissed the matter, claiming the intelligence that the agency has comes from the United States and Israel, and is forged.

But in a detailed report last November, the IAEA said it now possesses consistent intelligence on Iran's activities from numerous states.

That's not so easy to dismiss, according to Leonard Spector, a specialist on nuclear proliferation at the Martin Center for Nonproliferation Studies in Monterey, Calif.

"The Iranians have been put on the spot by the actual content of the last IAEA report, you know, accusing them of being involved in militarily related activities," he says.

Spector notes there are several areas where Iran has pursued nuclear activities that could only be related to weapons.

"There are questions about experiments with explosives which would be relevant to detonating a nuclear device," he says. "There are documents that they have regarding certain components that are shaped in a way that would only be suitable for a nuclear device."

The agency also possesses intelligence on Iran's work with neutron initiators that are used to spark a nuclear detonation.

And it has received this information from as many as 10 nations, notes Muhammad Sahimi, an Iran analyst who writes for the website Tehran Bureau.

The Iranians have been put on the spot by the actual content of the last IAEA report, you know, accusing them of being involved in militarily related activities.

"That also made it tougher for Iran to claim that these are all based on forged documents and discredited reports," he says. "So in that sense, Iran has been in a tighter position than before."

Still, Sahimi says, Iran is likely to fall back on its old explanations.

"I don't expect any breakthrough during this upcoming visit to Tehran, simply because neither side has really changed its position," he says. "The IAEA insists that Iran should explain some of these issues, and Iran has insisted that a lot of these issues are actually fake."

This upcoming set of talks in Tehran is rare. The IAEA sends its monitors into Iran every month to check on known nuclear activities, such as uranium enrichment.

The last talks to probe the more puzzling questions were held three years ago, without any progress.

Nevertheless, the United States welcomed the effort to discuss these unresolved issues, cautiously, in the words of State Department spokesperson Victoria Nuland.

"There were a huge number of questions raised by the November report," she says. "They will be seeking to answer those questions, and it's incumbent on Iran to be supportive."

A New Round Of Talks?

The upcoming talks were set some weeks ago, and then in mid-January, Iran also agreed to hold negotiations with the U.S., the European Union, and Russia and China, over its known nuclear activities.

But earlier this week, the Europeans slapped what amounts to an oil embargo on Iran, the toughest sanctions against Iran so far, an action that pleased British Foreign Secretary William Hague.

"This shows the resolve of the European Union," he says. "It is absolutely right to do this in view of Iran's continued breach of U.N. Security Council resolutions and refusal to come to meaningful negotiations on the nuclear program."

It's not clear yet whether these sanctions, which don't take full effect until July, will force Iran to negotiate more seriously or will make it more intransigent.

Leonard Spector is hopeful the pressure will do what it's meant to do.

"The totality of the pressures that are being brought to bear are quite substantial," he says. "It's a big change from a year or two ago. And it would be surprising not to see a little bit of movement at least from the Iranians, and perhaps we'll find to our surprise that we're really about to make some progress." 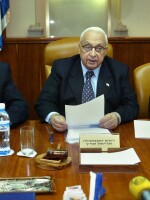