While battles over the fiscal cliff continue, one thing not being discussed is a recovery package for Superstorm Sandy. The Senate has already passed a $60 billion aid package. Right now, it's unclear if the House will take it up.

From member station WSHU, Charles Lane says people in the storm zone are concerned that repairs and rebuilding will be delayed, leaving them vulnerable to future storms.

CHARLES LANE, BYLINE: Here in the Long Island community of Long Beach, the only thing that kept the Atlantic Ocean from spilling into town was a thin strip of beach. Sandy swept it away two months ago. So, the city built a temporary 6-foot high sand berm, hoping to keep the sea back.

VALDO GILGORIC: I come here in the morning and it was water almost knocking the sand back again in the city.

LANE: Now, Gilgoric is watching the city build two rows of sand berms. Dump trucks hurry loads of sand up and down the beach not 20 feet from the water.

(SOUNDBITE OF A VEHICLE)

LANE: It's not clear if a double sand berm will keep Mother Nature at bay. What the communities along Long Island's south shore really need are sand dunes, 20-foot high piles of sand built by the Army Corps of Engineers. In Long Beach, something like that would cost about $100 million. President Obama and the Senate have signed off on some $60 billion worth of Sandy recovery aid that will fund sand dune construction. But the House doesn't appear to have any intention of taking it up before the end of this session.

This is a problem, according to Democrat and Long Island Congressman Tim Bishop.

REPRESENTATIVE TIM BISHOP: Municipalities are laying out hundreds of millions of dollars to repair and then onto clean-up and so on.

LANE: If by Wednesday night the 112th Congress doesn't pass an aid package, the Senate bill will have to start all over again. The 113th Congress is in session for two days before it breaks until the middle of January. That's two more weeks of winter storms beating their way to Long Beach and other communities.

BISHOP: This is a big deal. And, you know, why the House doesn't view this with the same degree of seriousness that we viewed Katrina or Tuscaloosa, you know, or Missouri, I mean, you know, is beyond me.

LANE: Right now, nothing is scheduled to come up for a vote. In the meantime, municipalities are doing what they can to protect shoreline communities. 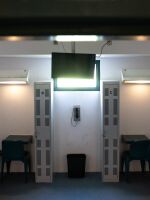