President Obama may be going into the next big budget fight without his longtime Treasury secretary. Timothy Geithner had been planning to leave before the start of the president's second term, but that would mean he is departing with the debt ceiling still looming and the Treasury scrambling to keep up with the government's bills.

NPR's Scott Horsley joins us now. And, Scott, Secretary Geithner has made no secret of his plans to leave the government, but it sounds like his departure could be complicated.

SCOTT HORSLEY, BYLINE: Well, it could be. As you say, he's wanted to leave for a long time. It is obviously a high-stress job, and his family moved back to New York in 2011. He's been anxious to rejoin them. He agreed to stay on two years ago, but said at the time that he would leave at the end of the president's first term.

The only reason there's even a question about now - that now is that the deal that we've just gotten through to resolve the fiscal cliff did not settle this question of what happens with the debt ceiling, as the White House had hoped it would. So the Treasury Department's now been using what it calls extraordinary measures to avoid a government default.

It can do that for a couple of months, but it's not easy, especially at this time of year when the government's cash flow is at its weakest state because they start paying out tax refunds, but the - a lot of the folks it owed taxes the government won't be paying until April. So this is a tricky period. Despite that, Bloomberg News reports Secretary Geithner wants out now.

SIEGEL: Let's go over Tim Geithner's record as secretary of the Treasury. He got off to a rocky start, first of all, we should say.

HORSLEY: He did. He was, of course, dogged during his confirmation hearings by tax problems. And then his first big moment in the spotlight as secretary, in which he outlined a plan to help banks deal with their toxic assets, was widely panned. Neither the plan nor the secretary seemed ready for prime time.

But as we slowly emerged from the financial crisis, the secretary's stewardship looks a lot better. For the most part, the big-bank bailouts have been repaid. The banking sector has been stabilized, although some critics say the government could and should have done more to encourage bank lending during this period.

The auto rescue, which was run out of Treasury, was, by most measures, a big success. The carmakers are profitable again. They have their best sales since 2007 last year. Even AIG, which was probably the ugliest part of the government bailout, is now running thank-you ads on television, noting that it's paid back what it owed in full, plus $22 billion in profit. So the secretary's record looks a little better with four years' hindsight.

SIEGEL: Well, assuming that he's leaving soon, who's likely to replace him at Treasury?

HORSLEY: Well, the first name you usually hear mentioned is Jack Lew. He's the president's chief of staff, and he's a veteran of the White House Budget Office, both in the Obama and Clinton administrations. Lew knows where all the bodies are buried on the government spreadsheets. In between government jobs, he had a short stint with Citigroup, but Jack Lew doesn't really have a lot of Wall Street experience, which could be a plus politically, but might mean he needs some backup at the Treasury Department.

One reason that a lot of people think Lew might get the nod, he didn't play a very conspicuous role in this most recent round of fiscal cliff negotiations even though he had a big hand in sort of setting the stage for the president's strong bargaining position. And some people think the White House didn't want Lew to perhaps alienate any senators if he was going to need their support in a confirmation battle.

Now he has not been formally nominated, and Bloomberg reports that the White House also sounded out the head of American Express, Ken Chenault, but he was not interested in the Treasury job. And there are other candidates such as Wall Street banker Roger Altman. He's another Clinton administration veteran who's sort of the Susan Lucci of Treasury appointments. He's a perpetual runner-up who never actually gets the nod.

SIEGEL: Well, Treasury is just actually one of the vacant seats to fill in the president's cabinet or soon-to-be-vacant seats. We know about State, where Senator Kerry awaits confirmation hearings, all the talk about Defense, of course, and the discussion of possibly former Senator Chuck Hagel being the nominee there.

HORSLEY: Right. We also still have an acting secretary at Commerce ever since John Bryson stepped down for health reasons last year. Those are just the vacant seats we know about. There could be others. Attorney General Eric Holder has said under no circumstances will he stay for four more years, although he may not be gone right away. We could be looking at a new Energy secretary, maybe others. So on top of all the other business Congress has staring in the face this spring, we could be looking a lot of cabinet confirmation hearings.

SIEGEL: And a vacancy at CIA to fill as well. Scott, thanks.

Scott Horsley
Scott Horsley is NPR's Chief Economics Correspondent. He reports on ups and downs in the national economy as well as fault lines between booming and busting communities.
See stories by Scott Horsley 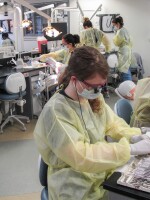