Is Running Your Car On Rubbish The Future Of Fuels?

The Environmental Protection Agency today proposed to scale back the amount of renewable fuels in our nation's gasoline supply, biofuels like ethanol made from corn. The EPA is responding, in part, to oil companies that say they're already taking as much ethanol as they can. They say any more and it will hurt quality. But there's another reason for the EPA's action. As NPR's Elizabeth Shogren reports, cheap biofuels haven't been developed as quickly as hoped.

ELIZABETH SHOGREN, BYLINE: When Congress created the renewable fuel standard six years ago, it wanted a greener, home-grown alternative to imported petroleum. The corn ethanol industry rose to the challenge. Jeff Lautt is CEO of POET, the largest ethanol company. He has 27 plants that make ethanol out of corn in seven states.

JEFF LAUTT: As long as cars have been around in America, Americans have had only one choice for fuel, gasoline. And we have been really been the first industry to change that and create consumer choice.

SHOGREN: But Congress also wanted to kick-start a much cleaner fuel industry. They hoped something called cellulosic biofuel would help address climate change. It's an advanced biofuel made out of corn stalks, trash and other wastes, and it has the promise of having a greenhouse gas footprint that's at least 60 percent smaller than oil. The law envisioned companies producing a billion gallons of cellulosic fuel by now. But companies are only pumping out several million gallons. Lautt says there are lots of reasons for the slower start.

LAUTT: That technology did not exist in commercial scale at the time that the law was passed. And so it really was a challenge to the private sector that said, hey, if you create this technology, then we will ensure that there's this market for you to sell your product into.

SHOGREN: Lautt says the bad economy made it difficult to meet this challenge, even though some companies got financial support from the government.

SHOGREN: Purdue University agriculture economist Wally Tyner says it was a good idea for Congress to promote the industry.

WALLY TYNER: The problem is that it is more expensive and more difficult technology-wise to do it than people thought in 2007.

SHOGREN: Tyner says costs have to keep coming down or the price of oil has to go up and stay up to make cellulosic fuel attractive to investors.

TYNER: And they're close. They're 110 to $120 a barrel equivalent. But that's not there yet. Nobody is going to invest money when that's what it costs to produce it.

SHOGREN: Well, not nobody. Two commercial-scale plants started up this year. One in Florida uses trash to make fuel and one in Mississippi uses waste from lumber mills. Four more plants are scheduled to start producing cellulosic ethanol next year. Abengoa is building one of them in Kansas. The company's executive vice-president, Chris Standlee, says cellulosic biofuels' time has come.

CHRIS STANDLEE: We have no concerns about the technology. Frankly, we have spent over a billion dollars to date - that's billion with a B - in proving this technology, and we've done it over 10 years.

SHOGREN: Purdue professor Wally Tyner says he hopes that after a slow start, cellulosic fuel will take off. But even if it does, it won't be enough to wean America from fossil fuels. 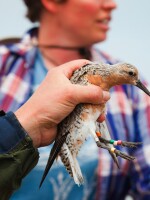