Two men are dead and 20 have been sent to hospitals following an accident in a Colorado gold and silver mine Sunday.

The Ouray County coroner's preliminary report says the men died of carbon monoxide poisoning. Investigators with the federal Mine Safety and Health Administration are still trying to determine exactly what happened inside the Revenue Virginius Mine.

Carbon monoxide is a byproduct of explosives commonly used in mining. Rory Williams, a manager with the mine's owner, Star Mining of Denver, says the injured and killed miners had not been using explosives Sunday, and that the carbon monoxide may have lingered from blasting the day before.

Williams says Star Mining provides gas detection devices to employees, "and they are not supposed to go into any working area in the mine without one of these devices, if anybody has any concerns they must have one of these devices, and if an alarm goes off on it they are to immediately retreat from that area."

But, he said he is not "personally 100 percent sure" how many, if any, of the miners killed or injured Sunday were carrying the safety devices.

"MSHA is investigating at this point," he said.

Williams says the mine has all required safety equipment, and that its ventilation system had been inspected and approved by regulators.

The Revenue Virginius has had a troubled safety record since re-opening in 2011, after being closed for decades. The publication Mine Safety and Health News says the accident rate at the mine is 115 percent higher than the national average, and that its safety "violations-per-inspection-day" rate is nearly three times the national average for underground mines, reflecting 25 violations since August, 2012.

Killed were Nick Cappano, 34, of Montrose and Rick Williams, 59 of Durango, who is not related to Rory Williams.

Of the 20 injured miners, four were admitted overnight to three area hospitals, the rest were treated and released for minor injuries.

The mine has about 100 employees and is temporarily closed pending MSHA's investigation. It is located in the San Juan mountains six miles outside the town of Ouray in southwestern Colorado, about 300 miles from Denver. 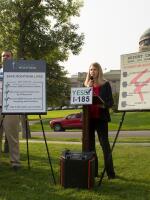