Six states will soon be chosen as commercial drone test sites. So major companies like Amazon say they're hoping to use drones to ship products. But first, the Federal Aviation Administration has to figure out how to fly them safely in civilian airspace. Nevada is one of the states that wants to give commercial drones a try, as Will Stone from member station KUNR reports.

WILL STONE, BYLINE: In the backroom of his office, Mike Richards readies his company's drone, the Aerial. With the flip of a joystick, two propellers kick into action.

STONE: Richards is C.E.O. of Drone America - a Reno-based small business that's trying to develop the next generation of unmanned aerial vehicles.

MIKE RICHARDS: She is the flying Swiss army knife. You can carry medical supplies, food rations. You can carry life rafts for deployment in a situation like Katrina or a tsunami.

STONE: The Aerial can land on water and resembles a small seaplane. Richards has big dreams for it - most involve delivering humanitarian aid or suppressing wildfires. But right now he still has a lot of paperwork for the F.A.A. before he can test in earnest. If Nevada becomes one of the federal sites, though, that will speed up the process.

One person who wants to see people like Richards testing here is Tom Wilzcek. He works for the state to develop the aerospace industry and says there'll be enough room for the big and small companies at Nevada's test sites.

TOM WILZCEK: Our sites are across the board from the Cadillac site to a site where basically it says, hey, listen, if you just need to go out and if you're mom and pop, we can offer that to you as well.

STONE: The state has chosen four major sites - two in the north near Reno and two in the south closer to Las Vegas. Wilczek says drones are in Nevada's DNA. It's the birthplace of the Predator Drone. And several major aerospace companies, as well as the military, already have facilities in the state. He points to the vast, unpopulated areas and the abundance of restricted airspace.

WILZCEK: You have to have an ability to offer up sites, which we do here in Nevada, where we can test worst case scenario in a real world environment.

STONE: At this point, there isn't a lot of opposition to drone testing here. In fact, Tod Story, who's director of the American Civil Liberties Union of Nevada, says he's OK with companies coming in to use the test sites.

TOD STORY: But actually implementing it back home or in the community, you know, where its use could potentially be problematic and violate privacy, that's where we have to strike a balance.

STONE: Unlike some other states, no anti-drone legislation has cropped up in Nevada. Actually, the state has set aside millions of dollars to develop the test sites. Steve Endacott is a former Navy pilot and now runs an aerial testing company, which is designing one of the possible sites in Fallon - a small city in a rural county east of Reno. He points to the snowy Stillwater Mountains cutting across the desert.

STEVE ENDACOTT: Well, we're on Rattle Snake Hill just outside of town; it leans toward the restricted airspace.

ENDACOTT: The city is saying, well, yeah, come on, set up right here.

STONE: Fighter jets from the nearby Naval Air Station zoom overhead, simulating combat. It's a reminder that the military has been testing aerospace technology in Nevada for decades. Endacott says ideally big companies will bring their commercial enterprises here and partner with local businesses like his own.

ENDACOTT: We want to see the big boys come out here and test their stuff. We're not sure that we want to see them stomp on all the locals here who have small businesses.

STONE: Endacott says it's too early to say exactly how the industry will look in Nevada. But like many states, it's hoping to capture even a fraction of what's projected to be a very lucrative business. For NPR News, I'm Will Stone in Reno. Transcript provided by NPR, Copyright NPR. 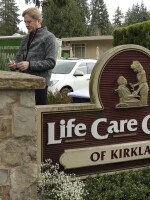 Will Stone
Will Stone is a KUNR alumnus, having served as a passionate, talented reporter for KUNR for nearly two years before moving in early 2015 to the major Phoenix market at public radio station KJZZ.
See stories by Will Stone
Latest Stories
Support news that matters in Kansas City
KCUR serves the Kansas City region with breaking news and powerful storytelling.
Your donation helps make non-profit journalism available for everyone.
Donate Now