For An Injured Vet, A True Homecoming On The Horizon

When Jerral Hancock came home from serving in Iraq six years ago, he received a hero's welcome in the Mojave Desert town of Lancaster, Calif. He'd been severely wounded but looked forward to returning to his family and getting on with his life.

But sometimes, celebrated homecomings can be short-lived. Things took a painful turn for Hancock a few years ago; his wife left and he became a single father of two. But with the help of an enterprising group of young people, Hancock and his children have brighter days ahead.

The room where Hancock spends most of his time now is painted blue — the color of ocean or sky. But it's been some time since the U.S. Army veteran, 27, has been to the beach. And when it's difficult just getting outdoors, sky blue walls have to make do.

"I know nothing will ever be the same, but a big word that they use now is 'new normal,' " he says.

The closest thing to normal in Hancock's life today is welcoming his kids home from school. From his wheelchair, he leans toward his 6-year-old daughter so she can give him a hug. Her older brother is right behind her.

Hancock was driving a tank on the streets of Baghdad in May 2007 when an improvised explosive device tore through the tank's armor and exploded into flames. It was his 21st birthday.

"I've kind of had to piece together the story, because I guess it was about 90 minutes that I was stuck in [the tank] while it was burning and whatnot," he says.

He returned with a body scarred by burns and paralyzed from the chest down. His left arm is gone and he has partial use of his right one.

Operation All The Way Home

The mobile home Hancock now shares with his two children was meant to be a starter house for his young family when he returned home from Iraq. But three years ago, just before Christmas, his wife left him and their children.

Hancock's mother and stepfather, who live across the street, became his caretakers. And the mobile home in this high desert region of southern California became his prison.

"I had no way to get down the stairs for the first six months I was home," he says. "My children's bedrooms I can barely get into. My son's — the hallway's so tight I can barely make the turn."

The mobile home's thin walls can't keep out the piercing cold desert wind, and the ceiling is water stained.

Chances are most residents here wouldn't have heard of Hancock's story if it weren't for Lancaster High School teacher Jamie Goodreau. Earlier this year she invited Hancock to be a guest speaker in her U.S history class.

"He's got an amazing sense of humor and he's close to their age, and they just connected," Goodreau says. "There was a bond. And we inquired through community members what his circumstance was, and that's how we found out about the house and the living conditions. And he's been there for six years."

The students decided they would build Hancock a new handicapped-accessible house. They called the project "Operation All the Way Home." They spent the summer fundraising, and designing and selling T-shirts and sweatshirts. There were yard sales and bake sales, and they spoke to anyone who would listen. So far, they've raised more than $130,000.

When Goodreau's final class of the day ends, the members of Operation All the Way Home get to work. Nicole Skinner, 17, has been involved with the project since first meeting Hancock.

"He opened up to us and told us about his story. And it moved us, you know?" she says.

The students say the project is teaching them lessons they'll never forget. Joey Mallyon, a senior, credits his teacher with impressing upon him that one should never assume that people facing challenges have the support they need.

"So it's always better to ask than to assume," he says. "There's probably tons of Jerrals out there and we want to see them have a better life."

The students have just closed escrow on a $264,000 property and will be making the mortgage and utility payments. With the help of the community here, the students plan to break ground on the new house in early 2014.

Hancock's children have dubbed the 3-acre property "the ranch." And it lives up to its name: a wide, open space with unending views of the mountains and the desert's resilient Joshua Trees.

Talking about the students brings a rare smile to Hancock's face. He says they have given him not only a new home, but also a renewed sense of purpose.

And yes — he's pretty proud of them.

"They really impress me, that's for sure," he says. "It feels like I've got 30 little brothers and sisters." 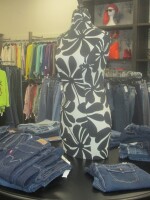