How Language Seems To Shape One's View Of The World

Lera Boroditsky once did a simple experiment: She asked people to close their eyes and point southeast. A room of distinguished professors in the U.S. pointed in almost every possible direction, whereas 5-year-old Australian aboriginal girls always got it right.

She says the difference lies in language. Boroditsky, an associate professor of cognitive science at the University of California, San Diego, says the Australian aboriginal language doesn't use words like left or right. It uses compass points, so they say things like "that girl to the east of you is my sister."

If you want to learn another language and become fluent, you may have to change the way you behave in small but sometimes significant ways, specifically how you sort things into categories and what you notice.

Researchers are starting to study how those changes happen, says Aneta Pavlenko, a professor of applied linguistics at Temple University. She studies bilingualism and is the author of an upcoming book on this work.

If people speaking different languages need to group or observe things differently, then bilinguals ought to switch focus depending on the language they use. That's exactly the case, according to Pavlenko.

For example, she says English distinguishes between cups and glasses, but in Russian, the difference between chashka (cup) and stakan (glass) is based on shape, not material.

Based on her research, she started teaching future language teachers how to help their English-speaking students group things in Russian. If English-speaking students of Russian had to sort cups and glasses into different piles, then re-sort into chashka and stakan, they should sort them differently. She says language teachers could do activities like this with their students instead of just memorizing words.

"They feel generally that this acknowledges something that they've long expected, long wanted to do but didn't know how," Pavlenko says. "They felt that it moved them forward, away from teaching pronunciation and doing the 'repeat after me' activities."

Pavlenko points to research showing that if you're hungry, you'll pay more attention to food-related stimuli, and she says speaking another language fluently works the same way.

One's native language could also affect memory, says Pavlenko. She points to novelist Vladimir Nabokov, who was fully trilingual in English, French and Russian. She says Nabokov wrote three memoirs: He published one in English, and when another publishing house asked for one in Russian, he accepted, thinking he would simply translate his first memoir.

"When Nabokov started translating it into Russian, he recalled a lot of things that he did not remember when he was writing it in English, and so in essence it became a somewhat different book," Pavlenko says. "It came out in Russian and he felt that in order to represent his childhood properly to his American readership, he had to produce a new version. So the version of Nabokov's autobiography we know now is actually a third attempt, where he had to recall more things in Russian and then re-translate them from Russian back into English."

Boroditsky also studied the differences in what research subjects remembered when using English, which doesn't always note the intent of an action, and Spanish, which does. This can lead to differences in how people remember what they saw, potentially important in eyewitness testimony, she says.

John McWhorter, a linguist at Columbia University, acknowledges such differences but says they don't really matter. The experiments "show that there are these tiny differentials that you can find that seem to correlate with what language you speak," McWhorter says. "Nothing has ever demonstrated that your language makes you process life in a different way. It just doesn't work."

He calls this "the language hoax," which happens to be the title of his upcoming book.

As an example, he refers to modern speakers of a Mayan language, who also use directions that roughly correspond to compass points, rather than left or right. Researchers asked people, most of whom only knew this language, to do tasks like memorizing how a ball moved through a maze, which would have been easier had they thought about it in terms of left and right, rather than compass points. The participants were just as good at these tasks and sometimes better, leading the experimenters to conclude they were not constrained by their language.

Boroditsky disagrees. She says the counterexamples simply prove language isn't the only factor affecting what we notice. Like studying to be a pilot or doctor, she says, learning to speak a different language fluently can also change us, and this means we can learn those changes, like learning any other skill.

"It's like a very extensive training program," Boroditsky says. "There's nothing exotic about the effects that language has on cognition. It's just the same that any learning has on cognition." 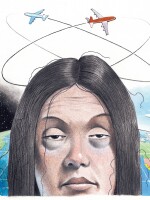