It took more than 90 rounds and a delay of two weeks, after judges ran out of words. But Jackson County, Mo., finally has its spelling bee champion, after two stellar spellers broke a tie Saturday.

Fifth-grader Sophia Hoffman and seventh-grader Kush Sharma became celebrities after they essentially broke the bee in February, as Maria Carter of member station KCUR reported Friday. At that competition, they lasted 66 rounds before organizers said they needed time to gather more words.

Today, the pair dueled for nearly 30 more rounds in a special spell-off held before an overflow crowd. In the end, Sharma prevailed, after Hoffman spelled "stifling" incorrectly, according to the Kansas City Star. Sharma took the win by spelling "definition."

The competition ended after Hoffman's parents unsuccessfully appealed to the judges, believing that the pronunciation of "stifling" might have confused her, KCUR reports. The judges reviewed a recording of the proceedings and found nothing amiss.

The judges might want to start getting some extra words together for next year: As KCUR's Carter reports, Hoffman and Sharma could be back in the same spot next year — they'll both still be eligible for the 2015 bee.

"It took us an hour to find more words," head judge Kaite Stover, a librarian at the Kansas City Public Library Central Branch, told Carter of the competition's first day, on Feb. 22. "And we were looking for words that were not completely archaic and uncommon."

But Hoffman, 11, and Sharma, 13, answered the challenge each time, relying on their knowledge of word origins and prefixes to see them through. After more than five hours, organizers threw up their hands to set up today's event.

The judges brought a fresh batch of 200 words to bear Saturday, from a list provided by the Scripps National Spelling Bee. They also had around 60 backup words just in case they're needed, the library says.

"I was a little nervous," Hoffman told Carter, recalling how she felt about the Jackson County Spelling Bee earlier this week. "I knew that Kush and I had both really prepared."

While they're sometimes portrayed as rivals, Sharma says the contestants don't see it that way.

"I don't think we see at as I beat her or she beats me," he told KCUR this week. "I think it's like the word beat me."

After the delay was declared, the two contestants and their families tried to get officials to agree that both of them should move on to the Scripps National Spelling Bee. But as Carter reported Friday, that idea was rejected.

Local officials tried to take the "sting" out of losing the bee Saturday, posting a photo on Facebook of Sharma and Hoffman clowning around while wearing bee caps.

"We will long 'bee' proud of what both Kush and Sophia did and the grace with which they did it," the caption read.

The Jackson County bee isn't the only one that went to overtime to determine a winner. The spelling contest in DeKalb County, Illinois, was also postponed until today, after two contestants — Matthew Rogers and Keith Mokry — went more than three hours and 74 rounds without a winner being declared, as the DeKalb Daily Chronicle reports. 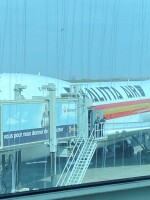 Bill Chappell
Bill Chappell is a writer and editor on the News Desk in the heart of NPR's newsroom in Washington, D.C.
See stories by Bill Chappell
Latest Stories
Hey, thanks for reading.
KCUR serves the Kansas City region with essential news and information.
Your donation today keeps local journalism strong.
Donate Now