If you bet that Boston's last bit of snow would melt July 14, you'd be right.

You may remember that the city got a lot of it this winter, and it dumped much of the cleared snow in unused parking lots — which it called "snow farms." The last one to melt, in Boston's Seaport District, was once 75 feet high.

As member station WBUR reports, "Mayor Marty Walsh tweeted Tuesday that a giant snow pile in a Seaport District parking lot, where the city dumped some of the winter's record-breaking snowfall after moving it off city streets, had finally melted." Walsh had challenged people to guess when the giant snow pile would disappear.

Thank you to all who participated in the #BOSMeltNow Challenge. It was a fun way to say farewell to #Boston’s last bit of snow. (3/3)

The Associated Press notes that the last major blizzard was five months ago.

Boston's commissioner of public works, Michael Dennehy, told NPR's Kelly McEvers on All Things Considered last week that the pile melted so slowly because there wasn't a lot of rain and the pile was encapsulated in dirt and debris — the sun just didn't have a chance to get at all the snow:

" McEvers: And you have actually picked your way around this snow mound. I mean, what's in there? What've you seen?

" Dennehy: Oh, so there's a lot of assets the Boston Water and Sewer Commission will be looking for us to return to them. There were some storm drain covers, catch basin covers, more than a handful of fire hydrants and other assets that other city departments are probably looking for.

" McEvers: (Laughter) What? We'd also read that it was, you know, a lot of garbage. Is that true too?

" Dennehy: Yes. So if you can imagine downtown Boston and the surrounding neighborhoods of Boston, during these four snowstorms, people were putting trash out as if it were going to be collected in a timely fashion. And it was collected, but unfortunately, it was collected by a front-end loader that was removing snow, so ..."

To give you a sense of just how big the snow pile really was, we'll leave you with these before and after photos that the Massachusetts Emergency Management Agency tweeted: 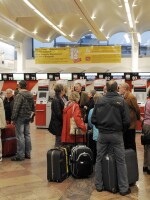