"I tell it like it is." Chris Christie made this his campaign slogan. Donald Trump repeats it whenever he's challenged on something he has said. And Scott Walker, Rick Perry, Mike Huckabee, John Kasich and Rick Santorum have said the same thing. It's the conventional pledge of candor, or what passes for it in American public life.

It's actually odd that anybody's still using the phrase. By rights it should have gone the way of dated '60s slang like "right on" and "can you dig it?" Like those expressions, "tell it like it is" had its roots in black speech in the 1940s and 1950s. Back then it just meant to come clean about something. In 1954, the R&B singer Roy Milton had a modest hit that went "Tell it like it is, Don't say you love me when I know you don't."

The phrase caught on in the early '60s, when black activists made "tell it like it is" a byword for confronting the realities of race in America. It was picked up by the hippies and the student left, and it soon became a hallmark of youth culture. Howard Cosell promptly co-opted it as a slogan, and the frenetic disc jockey Murray Kaufman wrote a guide to the younger generation called Murray The K Tells It Like it Is, Baby.

By 1968, George Wallace supporters were calling out "tell it like it is, George" at his rallies, apparently unaware that the phrase had been introduced a few years earlier by the likes of Malcolm X and LeRoi Jones. Politicians took it up to sound tuned in and relevant. Richard Nixon used it in his speech at the 1968 Republican Convention, urging the "forgotten Americans" to "tell it like it is." Gore Vidal suggested that Nixon probably didn't know what the phrase meant but assumed it was the kind of hip slang that Jack Kennedy would have heard from his Rat Pack pals in Vegas. But it was a natural fit for Nixon's vice president, Spiro Agnew. "I have a little experience in ... telling it like it is," Agnew said, as he ripped into the media, the campus protesters and the liberal intellectuals he called effete snobs, the charge that introduced effete into the modern political lexicon.

There had always been American politicians who made a virtue of their bluntness, from Andrew Jackson to Harry Truman. But nobody had ever used the media quite the way Agnew did. He fed their appetite for copy even as he was vilifying them. The more caustic his rhetoric was, the more play it got, and the more he became the rallying point for the resentments of what he called the "silent majority" — actually, a phrase he was using well before Nixon did.

It was around then that "telling it like it is" acquired its modern political meaning, which probably saved it from extinction. It isn't about personal honesty, like Jimmy Carter's "I will not lie to you." It promises blunt, no-nonsense talk about the hard truths that others are too craven to acknowledge. The colloquial use of "like" signals blue-collar authenticity. "I'll tell it as it is" may be grammatically correct, but nobody's going to want to have a beer with you.

From Agnew down to Christie and Trump, it's more often politicians on the right who have made that boast, particularly when they're known for being outspoken and combative. The rhetoric works best when the speaker can square off against the conservatives' traditional targets — the media who suppress the truths we need to hear, the intellectuals whom Ronald Reagan attacked for telling it "the way it is not."

It's true that Democrats like Ed Koch and Andrew Cuomo have used the slogan, too. But politicians on the left often go with a different applause line and talk about speaking truth to power. The target is shifted but the effect is the same — they're going to say what others don't want us to hear.

Politicians who say "I tell it like it is" like to follow it with something like "let the chips fall where they may" or "if you don't like it, tough." But that's always sham bravado. They're not going to run the risk of saying anything that will make their own partisans shift uncomfortably in their seats. The Republican isn't going to admit that voter fraud is a myth; the Democrat isn't going to say that gun control won't reduce crime. The "hard truths" they're going to tell are the claims that are intended to get a rise out of the people on the other side, to the gratification of the people on their own.

That has been the M.O. of political trolling since Agnew pioneered the technique a half-century ago, which is why "I tell it like it is" has proved so durable. Donald Trump reprised another phrase from that era the other day when he told a crowd in Phoenix "the silent majority is back" and offered to say what everybody's thinking but nobody else dares to admit. But there aren't any silent corners left in today's clamorous media world — everybody is talking at once, and you have to be pretty strident to get heard over the din.

We still recall Agnew for the zingers he got from his writers William Safire and Pat Buchanan — those alliterative aspersions like "pusillanimous pussyfooters," and "nattering nabobs of negativism." But those would be too polished to get the same kind of play today. These days, telling it like it is means testifying to your anger with plain talk and raw invective. Those effusions may not be memorable, but you can be sure we'll stay tuned to hear the next one. 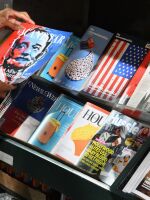