This is FRESH AIR. In 1954, the New York Drama Critics voted "The Golden Apple" the best musical of the year. It was the first time that an off-Broadway musical had won the award. Classical music critic Lloyd Schwartz says that wasn't the only extraordinary thing about "The Golden Apple."

(SOUNDBITE OF MUSICAL, "THE GOLDEN APPLE")

LLOYD SCHWARTZ, BYLINE: "The Golden Apple" isn't your typical Broadway musical. In fact, it's more of an opera than a musical. Not only the individual songs, but every word is sung. And it's in the tradition of operas inspired by the Trojan War, going back to the 17th century with Monteverdi's "The Return Of Ulysses." Except that instead of Mount Olympus in Greece, it takes place near Mount Olympus in Washington state after the Spanish-American War. Here, Helen is a bored farmer's daughter who triggers a war by flying off with a traveling salesman named Paris in his hot air balloon. Unlike its operatic predecessors, "The Golden Apple" is a musical comedy. So its most immediate ancestors are American folk operas, like "Porgy And Bess" and Virgil Thomson and Gertrude Stein's "The Mother Of Us All." And it paved the way for later operatic Broadway musicals, like Frank Loesser's, "The Most Happy Fella" and Leonard Bernstein's "Candide." The composer was Jerome Moross, a Brooklyn-born prodigy who's probably still best known for his music for Hollywood and TV westerns, like the theme for "Wagon Train" and his Oscar-nominated score for William Wyler's "The Big Country." But "The Golden Apple" is his most ambitious work. And his irresistible tunes are still fresh 60 years later. His librettist, poet John Latouche, was a year younger than Moross but died of a sudden heart attack in 1956, at the age of 41. He co-wrote the great lyrics for the 1940 standard "Taking A Chance On Love" and the later became part of the revolving door of distinguished lyrics writers for "Candide." The hit song from "Golden Apple" is "Lazy Afternoon." And who could resist Danielle Estes as the steamy Helen on a game-changing new recording?

DANIELLE ESTES: (As Helen, singing) It's a hazy afternoon. And I know a place that's quiet except for daisies running riots. And there's no one passing by it to see. Come spend this lazy afternoon with me.

SCHWARTZ: Despite its great reviews and awards and its movement from off-Broadway to Broadway, "The Golden Apple" was not a hit. Latouche said that he and Moross may have overestimated the theater's burning demand for novelty. I knew the show because there was an original cast album, which is still in print, with the wonderful singers like Kaye Ballard as Helen and matinee idol Stephen Douglass as Ulysses, who abandons his wife, Penelope, to retrieve Helen. But that recording has barely half the music and not all in the right order. A narrator intrudes to describe what's omitted. But a remedy has finally arrived in the form of a two-CD set of a complete live performance by the Lyric Stage of Irving, Texas, with singers who are also good actors. I love the variety of "The Golden Apple." Heartfelt love songs alternate with cutting social and political satire about, for example, the lame excuses politicians make in order to start a war. There's even a hilarious parody of a South Sea Island number.

SCHWARTZ: At the end, when Ulysses returns from his postwar odyssey, his hard-won reconciliation with Penelope is as moving as the similar scene in Monteverdi some 300 years earlier.

UNIDENTIFIED ACTRESS #2: (As character, singing) We'll just begin. We'll open our eyes. The night is past. And at last we're wise. We're one not two. You finally see that I am you and that you are me. We're free of doubt and we can begin to see ourselves as we've always been. With just...

SCHWARTZ: Thanks to this complete set, "The Golden Apple" is finally all there for us to experience. And it's exciting to discover that all the newly recorded material really adds up to something larger and much more original than just the sum of its most attractive parts.

GROSS: Lloyd Schwartz teaches creative writing in the MFA program at the University of Massachusetts Boston and writes for the online journal, New York Arts. He reviewed the first complete recording of the musical "The Golden Apple" on the PS Classics label.

(SOUNDBITE OF SONG, "NOTHING EVER HAPPENS IN ANGEL'S ROOST")

GROSS: If you'd like to catch up on FRESH AIR interviews you missed, you'll find what you're looking for on our podcast, including our recent interview with Pastor Nadia Bolz-Weber, a former standup comic who became an ordained Lutheran minister and started her own church for people like her, who are in recovery, dealing with addictions, compulsions, and depression. Transcript provided by NPR, Copyright NPR. 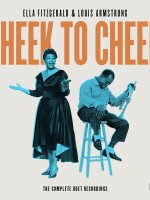