DAVID EDELSTEIN, BYLINE: Years ago, I got to hang out for a magazine piece with Joel and Ethan Coen on the set of their second feature "Raising Arizona." They were amiable and unpretentious and so was their cinematography, now a director, Barry Sonnenfeld who told me the brothers didn't care much about themes or stories. They just liked fooling around with movie fodder - that is, over-familiar tropes set in outlandish new contexts. I don't know if Sonnenfeld's characterization was entirely fair then, but it's certainly not now. Over the last decade, in "No Country For Old Men" and "A Serious Man" and "Inside Llewyn Davis," the Coens have proven their seriousness. They've created their own unique border world, straddling comedy and tragedy. But now, with their star-packed period comedy "Hail, Caesar!", it's like they've regressed. The movie is wall-to-wall movie fodder, and that's all. And it feels thin. Set in the 1950s, "Hail, Caesar!" centers on a Hollywood studio called Capital Pictures and its fixer Eddie Mannix played by Josh Brolin, who functions almost like a head of production. Mannix herds wayward actors, plugs casting holes and tries to keep the whole multi-ring circus from dissolving into chaos. As he wanders the backlot solving problems, the Coens serve up parodies of typical postwar escapist fare, biblical epics, soft-shoe sailor musicals, water ballets, grade B westerns and drawing room romances. It sounds irresistible, and some of it is. Two of the parody set pieces are so brilliant that they hold their own against what's being parodied. Channing Tatum, in a group of hoofing sailors, do a full-blown production number set in a bar that made me wish the Coens would drop what passes for their storyline and turn the film into a musical. They could teach a lot of modern directors how to stage, shoot and edit dance. The other showstopper is a kaleidoscopic water ballet in which Scarlett Johansson, as an Esther Williams type, plays a mermaid. Her character, as mouthy and blunt as her mermaid is ethereal, turns out to be pregnant, and Brolin's Mannix wants her hitched.

JOSH BROLIN: (As Eddie Mannix) Any more thoughts about who you might marry?

SCARLETT JOHANSSON: (As DeeAnna Moran) I ain't doing that again. I had two marriages. It just cost the studio a lot of money to bust them up.

BROLIN: (As Eddie Mannix) Well, we had to have those annulled. One was to a minor mob figure...

JOHANSSON: (As DeeAnna Moran) Vince (ph) was not minor.

BROLIN: (As Eddie Mannix) ...And Buddy Flynn (ph) was a bandleader with a long history of narcotic use.

JOHANSSON: (As DeeAnna Moran) Yeah, yeah, that's what I'm saying. They were both louses. Marrying a third louse ain't gonna do me no good.

JOHANSSON: (As DeeAnna Moran) Pretty boys, saps and swishes. What? You think if there wasn't a good, reliable man, I wouldn't have grabbed him?

BROLIN: (As Eddie Mannix) What about Arne Seslum? He is the father, isn't he?

BROLIN: (As Eddie Mannix) A marriage doesn't have to last forever, but DeeAnna, having a child without a father would present a public relations problem for the studio. That aquatic pictures do very nicely for us.

JOHANSSON: (As DeeAnna Moran) So you go and strap on a fish ass and marry Arne Seslum.

BROLIN: (As Eddie Mannix) The pictures do well for all of us. And it's a tribute to you. The public loves you because they know how innocent you are.

BROLIN: (As Eddie Mannix) Let me see if Arne's open to matrimony. You sure he's the father?

EDELSTEIN: That scene is wonderfully snappy, and there's an even better one in which Ralph Fiennes, as an aristocratic director, gently attempts to elicit a thoughtful line reading from a cowboy star played by Alden Ehrenreich, staggeringly miscast in a sophisticated love story. Fiennes and Ehrenreich are virtuoso farceurs. Their rapport is musical. But in between the great stuff, "Hail, Caesar!" droops. The lengthiest subplot features the biblical epic's thick-witted, alcoholic leading man played by George Clooney, who gets kidnapped by a shady consortium of Communist writers and held for ransom, all while they try to indoctrinate him in the evils of capitalism. All their scenes are dead on the screen. Clooney seems to like working with the Coens because they always cast him as a dumb guy. But his idea of playing dumb is to furrow his brow and babble hysterically. I wish he'd have switched roles with Josh Brolin, who's good - he's always good - but who might have brought a volatile innocence to the role of the actor while Clooney might have found his rhythm as a well-dressed thug using every drop of political savvy to keep childish performers in line. Watching "Hail, Caesar!", I wondered why it felt so over-deliberate before it hit me that, duh, almost every film Joel and Ethan Coen make is over-deliberate. It's their temperament, their style. Some people I know find it self-conscious and arch, and it can be, but when it fits the material, as in their glorious stoner gumshoe hodgepodge "The Big Lebowski." I find myself savoring every line, every shot. But I don't think their touch is loose enough for a crazy gag-fest like "Hail, Caesar!". They're too much like their main character, trying to maintain control and keep those splendid zanies in line.

GROSS: David Edelstein is film critic for New York Magazine. If you'd like to catch up on FRESH AIR interviews you missed, like our interviews with Brittany Howard of the band Alabama Shakes; Bassem Youssef, who became known as the Egyptian Jon Stewart and Jo Marchant, the author of a new book about how the mind can help the body heal, check out our podcast. You'll find those and many other interviews. Transcript provided by NPR, Copyright NPR. 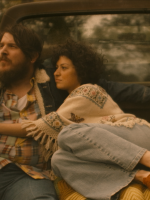