Spending time in space changes people: Not just their outlook on life, but also their eyesight.

For years, a North Texas doctor has been trying to find out what is causing this vision change among astronauts. His latest research provides some clues — and connects astronauts on the International Space Station, cancer patients on a roller coaster plane flight, and high-tech sleeping sacks.

After spending six months on the International Space Station, MichaelBarratt had a strange request when he finally stepped foot on Earth.

He wanted a spinal tap.

Barratt isn't a masochist, he's a NASA astronaut. While flying hundreds of miles above Earth in 2009, he noticed his vision was changing. He was struggling to read manuals and checklists.

"I spent a lot of time on the Russian segment as well. When you're reading in Russian in small print in a dark place, and your visual acuity starts to tank, you notice it!" Barratt says.

Barratt is also a very curious physician, which brings us to his request for a spinal tap to check the pressure in his brain. He knew he wasn't the first astronaut whose vision had changed while in space, and he hoped sticking a needle into his back might provide a clue to his vision loss. The leading theory at the time was that microgravity raises pressure in the head and reshapes the eyeballs, which could be problematic for long-term space travel to places like Mars.

"This is a medical issue that affects a large percentage of people who fly in space," Barratt says. "So the stakes are extremely high."

Scientists know that when people go into space, the fluid normally below their hearts goes into their heads. But is it creating enough pressure to damage the eyes? Does it flatten them and affect the optic nerve? Or is there something else at play?

Dr. Benjamin Levine is on a mission to find out. He's a professor at University of Texas Southwestern Medical Center and Director of the Institute for Exercise and Environmental Medicine. Instead of sticking needles in astronauts' backs, though, Levine decided to stick needles inside the brains of specific people who stay on Earth.

He found eight healthy cancer survivors who still had ports in their heads, once used to deliver chemotherapy. Those ports would allow him to directly measure their intracranial pressure.

Then, he convinced them to get on a plane for a sort of extreme roller coaster ride to simulate the zero gravity found on the ISS.

You know that feeling of weightlessness when you drop on a roller coaster? Well, these folks did that, except they plunged 8,000 feet in 30 seconds, dozens of times, all in the name of science.

Trent Barton, a lymphoma survivor from Dallas, went on the wild trip above the Texas-Mexico border.

"I enjoyed each and every rotation we did," Barton says.

During the flight, a needle in the port in his head monitored the pressure in the fluid surrounding his brain.

Turns out, Levine says, space flight doesn't cause pressure to be much higher than it is when you or I are standing up. But, it is a little higher. He published the results in The Journal of Physiology .

But, unlike us earthlings, astronauts never get to rest their brains in lower pressure. When they're standing up in zero gravity, the fluid stays in their heads and won't go to their feet. So, researchers like Levine are now trying to find a way to give these astronaut brains a rest. So we now think this mild but persistent pressure may be the thing that's stimulating remodeling the eye and causing the visual impairment," Levine says.

"We've been working with UnderArmour, the garment company, to come up with a soft, but comfortable almost like a sleeping sack or pair of trousers, that you can put on at night, hook up to a vacuum cleaner, suck the blood and fluid into the feet and unload the heart and the brain while you're sleeping," he says.

Astronaut Dr. Mike Barratt says he'd be willing to try the sleeping sack, but he also wants to do more tests on the ISS to better understand intracranial pressure before we send astronauts deeper into space.

As for Barratt's eyesight, six years after his flight?

"It's my right eye that has apparently been permanently remodeled," Barratt says. "Other than that, I'm totally normal."

In other words, he's still the same curious doctor, he just sees things a bit differently now that he's back on Earth. 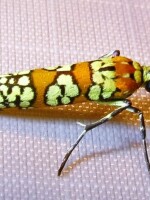 Lauren Silverman
Lauren Silverman is the Health, Science & Technology reporter/blogger at KERA News. She is also the primary backup host for KERA’s Think and the statewide newsmagazine Texas Standard. In 2016, Lauren was recognized as Texas Health Journalist of the Year by the Texas Medical Association. She was part of the Peabody Award-winning team that covered Ebola for NPR in 2014. She also hosted "Surviving Ebola," a special that won Best Long Documentary honors from the Public Radio News Directors Inc. (PRNDI). And she's won a number of regional awards, including an honorable mention for Edward R. Murrow award (for her project “The Broken Hip”), as well as the Texas Veterans Commission’s Excellence in Media Awards in the radio category.
See stories by Lauren Silverman
Latest Stories
Support news that matters in Kansas City
KCUR serves the Kansas City region with breaking news and powerful storytelling.
Your donation helps make non-profit journalism available for everyone.
Donate Now