Yasaman Alavi grew up in Iran, a country with a vibrant food culture. "Food is a big part of life in Iran," says Alavi, a psychotherapist who now lives in Washington, D.C. She says her mother and aunt were excellent cooks who often prepared big feasts for family gatherings.

But as a young woman in Iran, she didn't bother to learn their culinary tricks. "I didn't really like cooking that much," she says.

That changed once she moved to the United States in 2008. "I missed the Persian dishes," she says. "So that's what motivated me to cook more and more."

In this video, she shows us how she makes zereshk polow ba morgh —the Farsi name for a rice dish with raisins and barberries — a tart fruit like the cranberry — that is eaten with a slow-cooked chicken dish on the side. The meal is often accompanied by a yogurt sauce with cucumbers called mast-o-khiar.

Alavi says cooking in her adopted country also helped her deal with homesickness. "I kind of coped through cooking," she says. The act of re-creating dishes from her childhood and youth helped Alavi feel more connected to her country and family. These days, she and her husband, also an Iranian-American, regularly cook Persian food.

Alavi's instinct to tackle homesickness through food is something immigrants from many countries — including myself — can relate to. I moved to the United States in 2002 and only then started cooking the regional Indian cuisine from my home state, West Bengal. And while I love the range of cuisines I have access to in this country, the food I turn to when I'm homesick is a simple Bengali meal of rice and massoor daal —red lentils cooked with fried onions and a five spice mix called paanch phoron.

Sometimes the relatives from back home ease the pain with food parcels, like Greek families used to send to their loved ones abroad, says David Sutton, an anthropologist at Southern Illinois University. Sutton has studied the role of food in the Greek diaspora and found that Greek immigrants often describe how food from home makes them feel "whole."

"[T]here is an imagined community implied in the act of eating food "from home" while in exile," Sutton writes in a paper published in the journal, Anthropology and Humanism.

Some enterprising immigrants figure out a way to earn a living by serving the familiar tastes of home — and something more. Mina Bestman moved to Georgia from Liberia about 20 years ago and now runs Mina's Cuisine, a West African restaurant that caters to homesick Liberians. "I opened the restaurant so we can gather and talk about back home," Bestman told Goats and Soda in a story we published a few years ago.

Food is a powerful trigger for nostalgia, says Chelsea Reid, a psychologist at Virginia Commonwealth University. Even the smell of food can evoke nostalgia — and not just for immigrants. In a study published in 2014, in the journal Memory, Reid and her colleagues tested whether different scents — including pumpkin spice, apple pie, eggnog, perfume and cappuccino — could evoke nostalgia.

"The scent that evoked the most nostalgia was pumpkin pie," she says. "That's a scent that makes us think of celebrations, of Thanksgiving, gathering with family and friends."

She also found that the nostalgic feelings triggered by smells make people feel more optimistic and give them a sense of social connection.

That could explain why the smell of rice is so important to Alavi. "That's a big part of Iranian life — the house [always] smells like rice is cooking," she says. "I think I started cooking to make the new home smell like the old home that I had back in Iran."

(Note: You can buy dry saffron threads at any good spice store or online. Saffron threads should be dry. If they look moist, put them in the microwave for 5 seconds to dry them before cooking.)

Put the rice in a pot and add four cups of water and two tablespoon of oil with a pinch of salt.

Bring to a boil over a high flame.

Once the water is boiling bring the flame to medium-low. Then cover the pot and cook for about 30 minutes or until the water has evaporated.

Once there's no more water in the pot, and the rice looks close to being fully cooked, add 2 tablespoons of oil to the rice – drizzle 1 tablespoon around the outer end of the rice, and drizzle 1 tablespoon in a small circle over the middle of the rice. The oil will help make the bottom of the rice brown and crispy, while preventing it from sticking to the pan. This crispy crust is called tahdig in Farsi — it means "bottom of the pan." Most Iranian rice dishes are cooked this way to create a crunchy tahdig.

Melt 1 tablespoon of butter in a small pan, add the berries and raisins as well as 1 tablespoon of the saffron water. Save the remaining water for the chicken. Stir frequently for a few seconds, until the water evaporates.

Now take the rice pot off the stove and flip the pot over a plate. The rice should come out of the pot looking like a cake, with the crispy and golden brown tahdigon top.

Put half of the mixture of berries and raisins over the rice, and put the rest in a small bowl next to the rice for extra garnishing.

Heat the pan and pour 2 tablespoons of olive oil into it. Add the chopped onions. Cook on high flame, stirring occasionally.

Now coat the chicken pieces on both sides with the ground spice mix and add the chicken to the pot with the onion. Cover the pot and let the chicken cook over medium heat for 45 minutes to one hour.

Add 1 tablespoon of the remaining saffron water to the chicken and stir just before taking it off the stove.

Whisk the yogurt with salt, pepper, dried mint and dried rose petals till smooth. Add cucumbers and set aside till rice and chicken are ready.

To serve zereshk polow ba morgh, cut a wedge of the rice. Place it on a plate, garnish with some of the remaining berries, add a serving of chicken to the side and a dollop of yogurt sauce. Enjoy!

Tell us a memory you have about a dish you love. Post a video or photo on Instagram or Twitter with the hashtag #NPRHotPot, and we'll gather some of our favorites and post them on NPR.org. Get the details here. 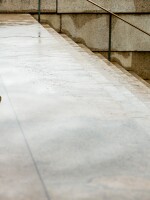