Charlottesville, Va., is remembering 1 of the 3 people who died after last weekend's protests there. Heather Heyer was killed when a car rammed a group of counter-protesters. Heyer's friends and family held a public memorial service today. They called on mourners to take up her fight. NPR's Debbie Elliott reports.

ELLIOTT: Friends and family told stories about how she developed a passion for equality as a young child. Elwood Shrader is her grandfather.

ELWOOD SHRADER: In earlier years, she wanted fairness. She wanted justice. She wanted everybody to get equal respect.

ELLIOTT: Her cousins described Heather as following in a long line of stubborn and passionate women. And her coworkers told of a paralegal who truly cared about the people who came in crisis to the bankruptcy practice. But the most moving tributes were from Heyer's parents.

MARK HEYER: No father should have to do this.

ELLIOTT: Mark Heyer said he was moved by the show of love for his daughter but sounded frustrated with the ongoing debate over what happened in Charlottesville when hate groups clashed with opponents.

HEYER: The day of her passing, she wanted to put down hate. And for my part, we just need to stop all this stuff and just forgive each other.

SUSAN BRO: They tried to kill my child to shut her up. Well, guess what? You've just magnified her.

BRO: If you're not outraged, you're not paying attention. Find what's wrong, and say to yourself, what can I do to make a difference? And that's how you're going to make my child's death worthwhile. I'd rather have my child, but, by golly, if I got to give her up, we're going to make it count.

ELLIOTT: The memorial service comes a day after President Trump blamed counter-protesters, what he called the alt-left, for stoking the violence at what amounted to the largest gathering of hate groups in recent history, a rally to protest plans to remove a Confederate statue from a city park.

Today Trump tweeted about Heyer, calling her beautiful and incredible and a special young woman. But outside the service, the thoughts rang hollow. Charlottesville native, Jeff Gleason...

JEFF GLEASON: He has no idea the hurt that he causes with his words.

TANESHA HUDSON: Why were we not protected? Why were the outsiders protected before the taxpayers were protected?

KAINE: It's important that they be answered. It is because what a grievous, you know, thing to let outsiders try to haul us backwards.

ELLIOTT: Two Virginia State Police were also killed Saturday in a helicopter crash after monitoring the white supremacist rally from the air. Funerals for Trooper Pilot Berke M.M. Bates and Lieutenant H. Jay Cullen will be at the end of the week. Debbie Elliott, NPR News, Charlottesville, Va. 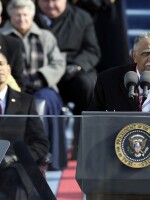