Ahead of President Donald Trump’s arrival Wednesday afternoon, groups supporting the president and those opposed to his policies are prepared to show up near the event venue.

One demonstration, called “ The People’s Protest” is expected to join forces at a local Teamsters Union hall before marching toward Loren Cook Company, where the president is to speak on tax reform.

Its event page read in part, “The members of Springfield Indivisible and the Springfield community are standing up on Wednesday to send a message to the president: it’s time for him to realize he works for the American people – ALL the American people. We the People do not want campaign rallies; we want human rights, affordable healthcare, and real tax reform that benefits working Americans.”

Meanwhile, Trump supporters are also planning to assemble near the manufacturer “To provide protection to people who wish to enjoy the opportunity to see President Trump speak live in Springfield, Mo, and to keep groups such as ANTIFA, and BLM, far enough away that it does not ruin or disrupt the rally. Hopefully, things will go very peacefully. But if not, we need to be prepared and organized.”

That demonstration is called Patriots Protecting Trump – Springfield, MO. It plans to meet at Vendor’s Mart before traveling toward Loren Cook.

Both groups are emphasizing peaceful demonstrations on their Facebook event pages.

Earlier this week, Springfield Police Chief Paul Williams asked on Twitter for “Any and all demonstrators to let their voices be heard in a civil and peaceful manner. Let’s show the rest of America why we’re proud to call Springfield home.” 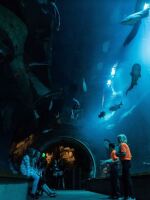 Scott Harvey
Scott joined KSMU in November 2012. He had previously served five years as news director for KETR-FM, the public radio station in Commerce, Texas. A graduate of Northwest Missouri State University in Maryville, Scott enjoys producing human-interest stories, among other pieces that educate and engage the community. When not at work, he’s often taking part in outdoor activities, exploring new areas and restaurants, or staying up-to-date with the latest news and information. Scott was born and raised in Shenandoah, Iowa.
Latest Stories
Support news that matters in Kansas City
KCUR serves the Kansas City region with breaking news and powerful storytelling.
Your donation helps make non-profit journalism available for everyone.
Donate Now