Stocks whipsawed today. At one point, the Dow fell nearly 1,600 points. It ended the day down 1,175 points or 4.6 percent. That is a record drop in points. Just in the past week, the market has had a number of big sell-offs, and this is a dramatic shift for a market that seemed to be going nowhere but up for more than a year now. NPR senior business editor Uri Berliner is here with us in the studio. And Uri, what happened today?

URI BERLINER, BYLINE: It was just a really sharp and jittery sell-off, especially late in the day. Investors were just dumping out of stocks. They were in freefall. And this is something we've seen very little of in recent years, basically since the bull market started back in 2009. And now we're seeing nerves back in the market and fear. You know, as you mentioned, the Dow was down more than 4 percent, and so was the S&P 500, which is a broader index of stocks. Those are very significant drops, the biggest one-day declines for boats since 2011. And now this sell-off started last week but really accelerated today. It was just a very unsettling, weird day.

SHAPIRO: Why do you say weird?

BERLINER: Well, because there's not one obvious factor that you can point to to what's causing the market to shift so dramatically. You know, we've seen some signs that inflation's picking up, and interest rates are starting to tick up, too. Why does that matter? Well, if interest rates go up, it makes it harder for companies to borrow and invest. It makes your mortgage more - could make your mortgage more expensive. But rates are still low by historical standards. And corporate earnings - they're really strong and mostly beating expectations, so that should be good for stocks.

SHAPIRO: Do you think people should start worrying about their investments, their retirement accounts?

BERLINER: Well, a lot of financial professionals are saying this sell-off is essentially healthy. They say stock prices are letting off steam, and that's better than if they continue to rise and rise and pop like a balloon that's been overinflated. But as always, psychology is going to be critical here. Even if prices fall more, maybe 10 percent or more, and then investors start coming back in looking for bargains, that would be one thing. But if fear takes over the market, then this could get pretty ugly.

SHAPIRO: How do you measure whether fear is taking over the market or not?

BERLINER: Well, one way is to look at volatility. Are there big swings in prices? There's this measurement called the volatility index, or VIX, and that's used as an indicator for fear in the market. A lot of people watched the VIX really closely during the financial crisis. Well, the VIX has been very placid for the past year. It's almost been comatose. Essentially there's been no fear in the market. Today, though, the VIX surged and is now above its historical average.

SHAPIRO: Give us some perspective here. The Dow fell 1,175 points today, which is the biggest point drop ever. Does that mean it was one of the worst days ever in the market?

BERLINER: No, not by a long shot. Keep in mind that the Dow has risen very high. Last month it was above 26,000. So today's drop in percentage terms is not even close to being the worst day ever. We had much worse during the dot-com collapse and of course during the financial crisis.

SHAPIRO: Does a stock market drop like this mean the economy is going to head in the same direction?

BERLINER: Not necessarily. Economic fundamentals are still strong. We had a stellar jobs report on Friday. Jobs are plentiful right now. Wages are starting to grow. And we've seen workers starting to get some bonuses and pay increases following the tax bill. So the stock market and the economy don't always move in the same direction. For now, fundamentals are good. But if companies get really nervous about a fall in their share prices, we could see that start to change. 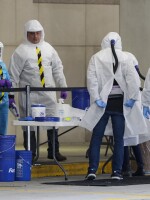