PHILIP REEVES, BYLINE: When Luiz Inacio Lula da Silva left office after two terms, he was one of the world's most popular leaders. Now, some eight years on, he's facing years in prison. His prospects of running in this year's election, in which he's front-runner, are now next to none.

REEVES: The judges of Brazil's Supreme Court took more than 10 hours to deliver their verdicts. At issue was whether Lula should be allowed to remain at liberty while mounting further appeals against a corruption conviction imposed last year. Deep into the night, the judges finally ruled by 6 votes to 5 that he should not. Lula's corruption conviction last year was by a judge who concluded he'd traded favors with the construction company on the promise of a beach-side apartment. When Lula later appealed against this, his sentence was actually increased to just over 12 years in prison.

Lula, who's 72, is a giant of left-wing Latin American politics who rose from being a metalworker to become leader of the region's largest nation. Many Brazilians still celebrate him as a champion of the poor. Ahead of the ruling, the Supreme Court was bombarded with signed petitions for and against him. Brazil's army commander caused an outcry by putting out a tweet that seemed to warn the court against granting impunity. Any hint of military interference in the judiciary is highly sensitive in a nation where some still remember life under military dictatorship.

REEVES: In the last two days, Lula's case has led to protests in dozens of cities. Today, the authorities are bracing for more. Some of his opponents argued that allowing him to remain free would undermine their country's huge corruption cleanup, known as Operation Car Wash. Car Wash has netted hundreds of crooked politicians and top executives. It's very popular, with many Brazilians weary of systemic corruption. Norbert Blatt was among a crowd who gathered on Copacabana Beach in Rio this week to urge the Supreme Court to vote against Lula.

NORBERT BLATT: It's important to show that people are going to jail for doing wrong things, even if it was an ex-president.

REEVES: Lula supporters on the left also mobilized, turning out in large numbers in Rio to see Lula.

REEVES: ...Who portrayed himself as the victim of media lies and of a conspiracy to stop him from running for a third term. Lula's fall means Brazil's presidential election looks wide open. For months, he's been way ahead in the polls. Philip Reeves, NPR News, Rio de Janeiro. 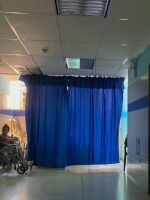