A powerful earthquake has hit the Indonesian resort island of Lombok. Leaving at least 90 people dead, this magnitude 6.9 quake came after Lombok experienced a smaller magnitude 6.4 quake just about a week ago. Michael Sullivan is monitoring this story, and he joins us now. Hi, Michael.

GREENE: So what is the latest so far? This sounds like this was a pretty big one.

SULLIVAN: This one was a lot bigger than last week's. We know the earthquake was centered about 6 miles below the ground in the north of Lombok, and most of the deaths and damage occurred in the north. Many of the dead were killed by falling debris, according to the National Disaster Mitigation Agency, with thousands of houses damaged. And the images from Indonesian television, David, were striking. I mean, you saw people running out of their homes, out of malls, out of the airport as buildings shook when the quake hit.

And I saw one incredible scene of men praying at a mosque and one man steadying himself while holding onto the swaying wall next to him while they continued to pray. And then there's this footage of men at another mosque feeling the quake, running out, and then the camera catches the ceiling starting to fall in just after they fled. It was really remarkable.

Thousands of people are now staying in emergency shelters set up in open places. And a lot of them will probably stay there tonight - some because they have nowhere else to go and some are fearful of aftershocks. And there have been many. So far, there have been no reports of foreigners being among the dead. But the spokesman for the National Disaster Mitigation Agency says the death toll is likely to rise. And the earthquake was strong enough to be felt on the neighboring island of Bali, which of course is Indonesia's most popular tourist destination.

GREENE: So if the death toll might rise, we might not know who out there might be in dire straits - I mean, survivors who need help. You mentioned there have been shelters. But are - does it look like they're actually getting relief to people who might really need it at this moment?

The airports on Bali and Lombok are open, so that's a good thing in terms of getting supplies in. And there's a lot of people, especially foreign tourists, who are trying to get out. Two quakes in a week, that's enough, some are saying. We're done. And many airlines are now trying to add flights to accommodate them, but the priority of course is helping those in immediate need, those who can't leave.

GREENE: Two quakes in a week - I mean, is this a region that just - I mean, that earthquakes are just not that uncommon?

SULLIVAN: They're not that uncommon. The last one, the damage wasn't as bad as this. A dozen people were killed last week, and hundreds were left stranded for a few days on the slopes of Mount Rinjani in the north before they could be rescued. But two earthquakes in a week are not uncommon, according to several seismologists that we spoke with.

GREENE: OK, Michael Sullivan reporting for us on this earthquake that we'll be following throughout the day on the Indonesian resort island of Lombok. Michael, thanks a lot. 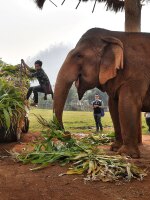