Colombia Has Become A Hot Spot For Medical Marijuana Industry

A lot of the world's illicit drug trade originates in Colombia. The country is a major producer of cocaine, heroin and marijuana. A new generation of entrepreneurs there is trying to put a positive spin on at least one Colombian narcotic. Reporter John Otis has the story.

JOHN OTIS, BYLINE: Julian Wilches greets his employees at a marijuana production site near the farm town of Pesca in central Colombia. Wilches is co-founder of Clever Leaves, one of the world's largest medical marijuana companies.

OTIS: Inside a series of greenhouses, Clever Leaves is growing 37 acres of marijuana. In this one, workers are watering marijuana seedlings. Within a few months, the plants will be 4 or 5 feet tall and ready for harvest. This involves clipping away the stems and branches while preserving the flowers, which are rich in chemical compounds called cannabinoids.

So this is the drying area?

WILCHES: Drying area. So right here, cutting. Drying. And after that, we're going to milling.

OTIS: The flowers are then dried and ground. The powder is turned into oils, extracts and crystals at a Clever Leaves laboratory.

OTIS: This year, the company began exporting its cannabis products to Canada and the U.K. Many countries are starting to legalize medical marijuana, but Colombia has a leg up on most of them because it did so three years ago. The industry has its own lobbying group, the Colombian Cannabis Association. Its president is Rodrigo Arcila.

OTIS: He points out that Colombia offers cheap farmland, relatively low wages and skilled labor, like these farm workers, who are pruning marijuana bushes.

OTIS: Then there's the climate. Colombia sits near the equator, meaning 12 hours of daily sunlight, year-round. By contrast, countries with seasonal variations require expensive artificial lights to grow marijuana. Colombia's advantages have prompted more than two dozen medical marijuana companies to open their doors here. Among them is Khiron, which produces everything from pain relievers for cancer patients to dog treats that act as calming agents. Alvaro Torres is Khiron's CEO.

ALVARO TORRES: It's nice to be able to switch that conversation from Colombia being the drug cartel, and now when I go to the United States and people are talking about, wow, you're building a great company - cannabis in Colombia - and that's amazing.

OTIS: Wilches of Clever Leaves agrees. He also likes the idea of turning the traditional pharmaceutical power structure on its head.

WILCHES: Pharmaceuticals always come from the global north to South America, to Africa, to Asia. This is something that is changing that model. This is from Colombia to the world.

OTIS: In the meantime, Clever Leaves has created nearly 500 jobs. Among the workers is Patti Santiago, a mother of two from northern Colombia. After her husband was threatened by neighborhood dope dealers, they fled here.

OTIS: Even though it's legal, Santiago says she initially felt a bit scared working at a marijuana plantation. But she's gotten used to it.

OTIS: She says the new industry proves Colombian drugs don't have to be linked to drug traffickers. Now, she says, they can be used to treat people. 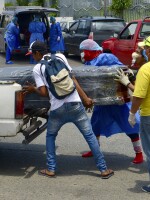