You might remember, a couple of weeks ago, the Kremlin refused to issue visas to two U.S. senators - Democrat Chris Murphy and Republican Ron Johnson. Well, a third U.S. senator was granted a visa, Republican Senator Mike Lee, and his visit to Moscow has stirred up its share of controversy. One Russian state-run media outlet reported that Senator Lee discussed the U.S. dropping sanctions on Russia. Senator Lee's visit is only the second official visit to Russia in the five years since Russia sent military forces into Ukraine. NPR's Lucian Kim tracked him down in Moscow.

LUCIAN KIM, BYLINE: I staked out Senator Lee at a fair in Gorky Park, where Russian kids were showing off robots they'd built at the U.S. Embassy's Cultural Center. Coincidentally, I found the Republican senator testing a mechanical elephant made out of Legos.

KIM: Lee was winding down a two-day visit to Moscow, which he had made even after two of his fellow senators, Chris Murphy of Connecticut and Ron Johnson of Wisconsin, were barred from entering Russia. The last time a member of a congressional delegation was denied a Russian visa, in 2017, her colleagues canceled the entire trip. But Lee defends his decision.

KIM: Lee maintains U.S.-Russian relations have cooled off, as he puts it, perhaps more than they necessarily need to. Some people might characterize the relationship as being in a deep freeze - following Russia's annexation of Crimea, U.S. accusations of election interference by the Kremlin and the Trump administration's withdrawal from one of the last major arms control treaties. Lee's visit came the same week that Russian authorities were cracking down on anti-government protesters, with one sentenced to four years just for attending unauthorized rallies.

KIM: Lee says Russia can do a lot to reduce the toxicity of the relationship, by refraining from election interference in the future, guaranteeing religious freedom or protecting LGBT rights. Lee's guide during his first visit to Moscow was his friend, U.S. Ambassador Jon Huntsman. Huntsman, who's leaving his post next month, is adamant the trip was worth it.

JON HUNTSMAN: Having the Russians able to hear voices from our legislative branch is a really important thing.

KIM: The ambassador rejects the notion this congressional delegation was mostly just a photo op for the Russian government.

HUNTSMAN: There's always going to be propaganda and disinformation associated with this relationship to some degree. But what we're looking for is real dialogue - people looking at each other across the table, exchanging in frank and honest discussions.

KIM: Lee spent his time in Moscow meeting with Russian lawmakers and the American business community here, two groups of people keen to have economic sanctions eased. Lee says it's time to review the multiple sanctions the U.S. has imposed on Russia.

LEE: We need to assess from time to time how they're doing, what impact they're having. As with any policy, it's important for us to reassess whether our policies make sense - who they're helping, who they're harming.

KIM: It will be a tough sell back in Washington. Last week, the chair and ranking Republican of the House Foreign Affairs Committee issued a joint statement condemning what they called acts of aggression by the Russian government against its own people protesting in the streets. 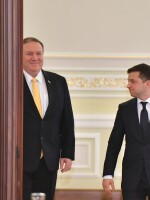