Ary Guerrero joins Classical KC as part of her impactful career in the fundraising and development sphere. Learn more about the Venezuela native and her passions for classical music, nature, and cultivating community.

For Ary Guerrero, creating connections and cultivating community is a driving force in her life. She recently joined Classical KC as the new major gifts officer.

Guerrero grew up in Puerto La Cruz, Venezuela, where her ties to classical music started at a young age playing organ and piano. When she was 15, she came to the U.S. to be a Rotary Exchange Student in Kearney, NE. Kansas City is where she found a welcoming environment and a thriving cultural community.

“I’ve lived in many places in the Midwest where I don’t see many Venezuelans, but Kansas City has such a rich, diverse community that provides opportunities for exploration and creating connections unlike other places I’ve been. It’s the only city that I’ve come back to, and there’s a reason for that.”

Before joining Classical KC, Guerrero worked for various nonprofits in Lawrence, KS and Kansas City working in fundraising and development. She was drawn to the field because she wanted to make a difference beyond her individual efforts.
“I’m always seeing the needs of the community and the things I could do if I had access to greater funds. I realized that I could be that connector of people and engage in storytelling in a way that could effectively benefit my community.”

The desire for human connection and expressing emotions that can’t be said in words is one of the many powerful features of classical music, and Guerrero experienced that firsthand. After the sudden death of her father to COVID-19, she found respite in classical music and found that it gave weight to her feelings in a way that transcended words.

“During that time, I just happened to get a letter from KCUR telling me about the launch of Classical KC and I decided to listen. It gave me the ability to process my emotions in a way that felt authentic and comforting.”

Classical KC left an impact on her, and joining the team allowed for her “personal and professional life to converge.”

She’s proud of the impact her home country has had in the classical music world, through its national youth orchestra program, El Sistema. The program is designed to enrich the lives of disenfranchised children, and has produced world-renowned classical leaders like Gustavo Dudamel, with a motto of “Music for Social Change.”

“I grew up in a country where media is restricted, so music was/is a way to highlight current events and respond to injustices without words. It’s a beautiful and powerful thing to behold.”

One of Guerrero's favorite musicians is pianist Gabriela Montero, featured above.

Outside of music, Guerrero finds herself connecting with nature, whether it be going for walks, kayaking, or gardening. She serves on the board for the KCK Farmers Market and uses the produce she grows and/or buys to cook traditional Venezuelan meals. You won’t find her using a recipe, though – everything is made to taste.

“I cook with intuition, which is very Venezuelan. I love it — it connects me to home and brings me peace, creating something with my two hands and sharing it with friends and family.”

We’re thrilled for Ary Guerrero to be on the Classical KC team and are excited for her to help build an environment that elevates the voices within Kansas City’s local arts community.

Brooke Knoll
Brooke Knoll is the digital audience specialist and on-air host for Classical KC. You can reach her at brooke@classicalkc.org.
See stories by Brooke Knoll 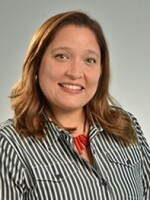 Ary Guerrero
Ary Guerrero is the major gifts officer for Classical KC. You can email her at ary@classicalkc.org.
See stories by Ary Guerrero
Hey, thanks for reading.
Classical KC serves Kansas City with 24 hours of classical music, day in and day out.
Your donation today keeps classical on the air and online.
Donate Now