The University of Missouri should emphasize diversity in its recruitment, train professors in the importance of diversity in their courses and increase outreach to improve diversity among faculty and staff, a systemwide task force recommended on Wednesday.

Those proposals were among priority items included in the task force’s report. It was responding to a comprehensive audit of diversity, equity and inclusion practices at the university conducted by the consulting firm IBIS.

The task force on diversity, equity and inclusion was named by the university in November 2015 as part of the reaction to the racial unrest on the Columbia campus that led to the departure of system President Tim Wolfe and R. Bowen Loftin as chancellor at Mizzou.

It included representatives from all four of the university’s campuses, plus the system office and university extension. In its 21-page report, it said the school’s willingness to evaluate its efforts in diversity reflects “leadership and courage.”

It also noted that the problems that surfaced at Mizzou last year are not unique to higher education. 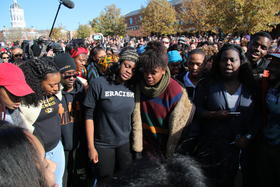 “Dissatisfaction around the unrealized fulfillment of these three concepts is not a contemporary phenomenon,” the report said. “Universities and society have historically struggled with diversity, equity and inclusion reducing these qualities to discussions of race and gender alone while ignoring other important identities such as class, religion or sexual orientation, to name just a few.”

“The university must create an environment where each constituent is not just welcomed, but able to thrive and succeed. By acknowledging the multiple identities of our constituents, the university will be giving voice or recognizing the value therein of each member of the community. By creating a plan of action or recommendations that can be measured, constituents will be able to hold the university accountable and in turn the university can track its own progress in and across these areas.”

The chair of the task force, Mizzou associate dean S. David Mitchell, called the recommendations “a strategy to address gaps in what is provided to our students, faculty and staff in terms of diversity and inclusion when benchmarked against best practices in comparable higher education institutions. This is another milestone in the effort to make our campuses more inclusive, welcoming and respectful for everyone in our university system.”

In his response to the report, interim system President Michael Middleton said he supports the recommendations.

“We have made significant, tangible progress on the initiatives established one year ago by the board of curators,” said Middleton. He was named to the interim position a few days after Wolfe’s resignation; a permanent president for the university, Mun Choi, takes office March 1.

“Today’s release of the audit and recommendations for the university based on the audit’s findings, represent another important step forward. I also am, and shall continue to be, heartened in seeing and sharing the success stories that rise out of our joined efforts to create the university we imagine.”

Introducing the recommendations, the task force report noted that the audit of diversity, equity and inclusion at the system level and on the university’s campuses is just the first step.

“The university can no longer simply measure its efforts with respect to diversity, equity and inclusion solely based upon compliance,” it said. “The university must achieve more than just competence in these areas. It has to strive for excellence as it does in its academic, athletic, health care, and other programs.

“To assess whether the university has achieved excellence in this area, it is necessary to provide a common language for discussion and a lens through which the university can view diversity, equity and inclusion.”

And, it added, support from the top, moral and otherwise, will be crucial for the recommendations to become reality.

“It is not enough for the System to create initiatives with the expectation of campus implementation without a consideration of funding support,” the task force said. “Far too often, campuses have been asked to expend limited resources on newly proposed initiatives while maintaining the quality and effectiveness of existing programs. And yet, campuses must also continue to invest in diversity, equity and inclusion.”

The recommendations are divided into sections, according to each campus and division of the university. For the St. Louis campus, they include:

Priorities for the system include:

The panel concluded that improved performance in these areas has to be a priority for everyone at the university.

The University of Missouri’s Board of Curators holds the license for St. Louis Public Radio.

A fraternity at MU has been suspended after members allegedly yelled racial slurs at black students in front of their fraternity house Tuesday night.

Administrators responded Wednesday afternoon by temporarily suspending the Delta Upsilon Fraternity. The university is also investigating the students involved in the incident to determine whether any individuals should also be punished.

The confrontation came nearly a year after the MU campus erupted in protest over a similar incident, resulting in the resignation of the university system president.

2,630 drop in MU enrollment to contribute to $31.4 million budget shortfall

The University of Missouri is now projecting a drop in enrollment of 2,630 students for the next school year, which will contribute to a $31.4 million revenue shortfall for MU next year.

University of Missouri leaders briefed faculty and staff Wednesday with the latest figures on enrollment and the budget for the next fiscal year. Vice Chancellor of Finance Rhonda Gibler explained the cuts necessary to right the ship at MU will not be easy.

After The Mizzou Protests, Students Ask Themselves: Now What?

A week after protests over racism at their school became the biggest story in the country, 300 students, faculty and community members marched through the University of Missouri, Columbia campus behind a banner that read "Mizzou United, Columbia United." Their goal: to keep talking about what's been going on here, and why.

Following Tim Wolfe’s resignation Monday, Concerned Student 1950 held a news conference at Traditions Plaza to talk about the university’s action, and to voice their reactions.