If there’s one common refrain from nearly all of the Kansas candidates for governor — Republicans and Democrats — it’s support for the Second Amendment.

For Republicans, that’s mostly a battle of who can express that support in the loudest tone. Gov. Jeff Colyer listed defending the Second Amendment as one of his top priorities, among lowering taxes and improving schools. Secretary of State Kris Kobach drew attention by driving a Jeep with a replica machine gun in a parade.

For the Democrats, State Sen. Laura Kelly and former Kansas Secretary of Agriculture Josh Svaty repeat their support of gun owners on the campaign trail. They also tout their records supporting gun rights legislation during their time in the Kansas legislature — even as they take steps to add qualifiers to those records.

“It became very clear that we went too far,” Kelly said, referring to the law she supported in 2015 that lets Kansans carry concealed weapon without permits.

Svaty said that while he voted for a concealed carry bill in 2006, “it required eight hours of training and obtaining a permit from the state of Kansas.”

The school shootings in Parkland, Florida, and Sante Fe, Texas, earlier this year flung the debate over gun control back into the forefront. Yet since then, passion for the issue has waned.

An NPR/PBS Newshour/Marist poll found that while 74 percent of registered Democrats considered gun policy a major factor in deciding their vote in February, that dipped to 53 percent in April.

For Democrats, the issue represents a tricky balancing act. While advocating for gun control could push away the moderate Republicans needed to win the general election, it can also attract Democratic votes in the primary. Gun control also presents an opportunity for Democratic candidates to distinguish themselves from their primary opponents and attack their previous voting records. 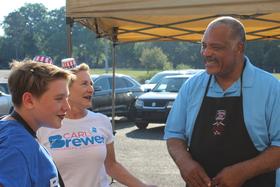 That’s where former Wichita Mayor Carl Brewer’s lack of a voting record on gun legislation could be an advantage. A recent video on his campaign’s YouTube page doesn’t feature Brewer. Instead, it shows clips of Kelly and Svaty attacking each other on guns.

“Svaty and Kelly can make a lot of noise and engage in a lot of justification, whereas Brewer can just step back and maybe lob a few bombs,” said Russell Fox, a political science professor at Friends University in Wichita.

Brewer — as a hunter and former member of the Kansas Army National Guard — also brings a history with and knowledge of guns that the other Democratic candidates lack.

“I served in the military for 21 years,” Brewer said. “I’ve trained soldiers to go to combat with various different weapons and preparing them to take somebody’s life. I know what those weapons will do.”

Katie Sullivan, president of the Kansas State University Young Democrats, calls gun violence a high-priority issue. She recalls the silence in her high school art class as the news of the 2012 Sandy Hook Elementary School shooting played on the room’s TV.

“Politics are tough,” Sullivan said. “It’s hard to find the perfect person. But I think with what Laura Kelly is running on right now with her platform, especially with gun control — I think she’s the way to bring about a much safer Kansas.”

Democratic candidates also have to consider the politics of gun control beyond the primary. Political experts consider the gun debate a stronger draw for conservative voters than for liberals. For Kelly, promoting a gun control platform could hurt her with the moderate Republicans who she has said would be key to her victory.

“Kelly would like to get through with as little baggage as possible to get to the general election,” said Neil Allen, a political science professor at Wichita State University.

Other issues beyond gun control could shift the focus from where Democrats want it — the legacy of former Gov. Sam Brownback.

“Anything that takes the conversation away from the record of former Governor Brownback,” Allen said, “is probably not what Democrats want.”

Kansas News Service stories and photos may be republished at no cost with proper attribution and a link back to the original post.

GOP Candidates For Kansas Governor Separated By Style, If Not Politics

Kansas Gov. Jeff Colyer and Secretary of State Kris Kobach — rivals for the Republican gubernatorial nomination — are both diehard conservatives. On the campaign trail, they squabble over who’s more conservative on core issues like immigration, abortion, guns and taxes.

It’s clear, if elected, either would keep the state on a conservative path. The question for primary voters is whose approach would be best for tackling that agenda.

The Kansas Democratic party hasn’t had a gubernatorial primary since 1998. The unfamiliar competition this year is forcing Democrats across the state to wrestle with their identity ahead of the Aug. 7 election.

Should their nominee be a candidate who aligns strictly with the progressive ideals of the party platform, or someone with broader appeal? Do they go with experience and name recognition, or youthful exuberance?

Kansas Democrats have filed two gun control bills for the upcoming legislative session. With some key lawmakers signaling resistance, the proposals could be a tough sell.

Still, legislators from both parties expect discussion of the state’s role in regulating firearms.

'Campus Carry' Is Now Law In Kansas, But Student And Faculty Anxiety Remain

After years of anticipation, and a final round of heated debate in the state legislature, "No Guns" signs finally came down at Kansas college campuses Saturday. The state's new so-called "campus carry" law went into effect July 1.