Win or lose, such action could help the state’s entire Democratic ticket.

“We need to show the support is here, to pull her over the top,’’ Slay told reporters, shortly before addressing the shoulder-to-shoulder audience that spilled onto the sidewalk outside the Clinton campaign office at 4039 Lindell Blvd.

“We’re hoping to make sure to convince the Hillary Clinton campaign that the state is in play,’’ the mayor added. 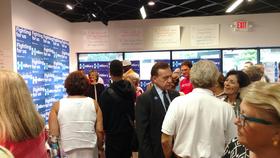 Slay is among the area Democratic activists who are heartened by recent Missouri polls – the latest out Tuesday – that showed Clinton just barely trailing Republican presidential nominee Donald Trump. (Critics note, however, that the polls' sample sizes were small, which substantially increases their error margins.)

Trump long has been considered the favorite to carry Missouri in November, in part because it’s been 20 years since a presidential Democrat – Bill Clinton – won the state (and its then-11 electoral votes. Now, the state has 10).

But the fact that Trump’s campaign announced this week that he’s hiring two prominent Missouri Republican consultants, and opening a state office, is seen by many activists in both parties as evidence that Missouri isn’t a GOP lock.

The region’s Democratic optimism was on display at the opening of the new Clinton campaign office. LaDonna Appelbaum, vice president of the Maryland Heights Township Democratic Club, said she’s excited about the prospect of electing the nation’s first woman president.

In her opinion, Clinton also is the best qualified candidate. “I believe Hillary has what it takes. Her experience, her knowledge, her compassion, everything is going to make her a great 45th president.” 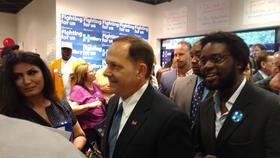 Appelbaum added that she’s particularly upbeat because of many of her friends who had backed Vermont Sen. Bernie Sanders during the primaries “are now on board’’ with Clinton.

“This is a state that has really mattered in the past,’’ he said. “We used to be a bellwether.”

Slay added that his interest wasn’t just political. “I want St. Louis to be relevant on the national scale,” he said. “That’s another reason why I’m here. Cities need a president who has interests in urban areas.”