VIDEO: 'It Gets Better' For Mormon Students, Too

Since its launch in 2010 by columnist Dan Savage, the campaign has grown into an Internet-wide support net for gay and lesbian teenagers. Now, students from a strict Mormon college have launched a video as part of that campaign to reassure gay and lesbian youth who might be struggling with their faith and sexual orientation.

According to the AP, the video posted by 22 students at Brigham Young University is the first of its kind with ties to the Church of Jesus Christ of Latter-day Saints. The school forbids gay sex and marriage, and the students could face excommunication from the church and expulsion at BYU.

It was only five years ago, in 2007, that students were allowed to talk about their sexual orientation without risk of expulsion under the school's honor code.

One's stated same-gender attraction is not an Honor Code issue. However, the Honor Code requires all members of the university community to manifest a strict commitment to the law of chastity. Homosexual behavior is inappropriate and violates the Honor Code. Homosexual behavior includes not only sexual relations between members of the same sex, but all forms of physical intimacy that give expression to homosexual feelings.

"Students who uphold the honor code are welcome as school members of the campus community," BYU spokeswoman Carri Jenkins told the AP.

In 2010, the school lifted the ban on advocacy of homosexuality, allowing for the creation of the campus advocacy group Understanding Same-Gender Attraction, which produced the video.

Gay activists are celebrating the video as the latest sign that the church is becoming more open to their community. 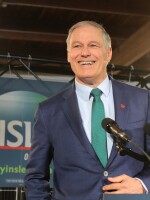