This past week, John Abdallah Wambere finally heard the seven words he had been waiting for:

"Your application has been recommended for approval."

Wambere, a prominent Ugandan LGBT-rights activist, had applied for asylum in the United States, due to anti-gay persecution in his home country.

In a letter dated Sept. 11, 2014, the U.S. Citizenship and Immigration Services told Wambere that if he passes a background check, the government will formally grant the activist asylum.

Back in May, Wambere told NPR's Arun Rath he no longer saw a future for himself in Uganda, after the country's president signed into law the harsh Anti-Homosexuality Act, which made homosexual acts punishable by prison terms, including life in prison.

"I have nowhere to go," he said at the time. "Home is not safe and it's not even a place I would want to think about."

When his lawyers called to tell him the news about his asylum application last week, Wambere said he was overcome with emotion.

"I felt like flying, screaming on top of my voice, telling the whole world," said Wambere by phone from New York.

"I just felt so overwhelmed, overjoyed, felt like running in the streets of New York — screaming and jumping. It was a big achievement in my life."

A Ugandan court invalidated the Anti-Homosexuality Act on a technicality in August, but the situation for LGBT Ugandans still remains serious.

Wambere said he is unsure of where he will ultimately settle in the U.S., but that he will continue to advocate for LGBT Ugandans "as long as we still have that battle to fight for that freedom and equality." 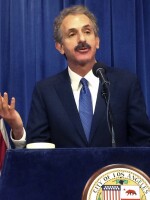 Tom Dreisbach
Tom Dreisbach is a producer and editor for NPR's Embedded. His work has examined how opioids helped cause an HIV outbreak in Indiana, the role of video evidence in police shootings, and the controversial development of Donald Trump's Southern California golf club. In 2018, his work on Embedded was awarded a national Edward R. Murrow Award from RTDNA. Prior to working on Embedded, Tom was an editor for All Things Considered, NPR's flagship afternoon news show.
See stories by Tom Dreisbach
Latest Stories
Support news that matters in Kansas City
KCUR serves the Kansas City region with breaking news and powerful storytelling.
Your donation helps make non-profit journalism available for everyone.
Donate Now