The Return Of Bilingual Education In California?

Nearly two decades after California banned bilingual education, voters next month will have a chance to restore it. Proposition 58 would officially end the era of English-only teaching and re-introduce instruction in English and a second language as an option.

About 1.4 million English Language Learners, or ELLs, make up roughly 23 percent of California's public school students. Most are Spanish-speakers.

Critics of bilingual instruction say it delays kids' ability to read, write and speak proper English because they spend too much time learning in their native language. That view was widespread in 1998, the year that 61 percent of voters passed Proposition 227, ending what was called "transitional bilingual education."

Prop 227 did not outlaw all bilingual education programs. It did, however require that parents sign a waiver if they wanted to keep their children in a bilingual classroom. Without a waiver, ELLs were automatically placed in English-only classes.

A lot has changed in 18 years though. Public support for programs that help children master two languages has grown significantly in California. More and more parents see biliteracy as a crucial skill that will open doors for their children. And districts like San Francisco and Los Angeles have created sizable bilingual programs using that waiver provision.

One influential supporter of Prop 58 is Shelly Spiegel-Coleman. She's head of Californians Together, a Long Beach nonprofit that's behind the so-called "biliteracy movement" in California. She says knowing at least two languages now is as important as being proficient in math, science and reading.

Advocates of Prop 58 point to a 2014 Stanford University study of 18,000 ELLs in San Francisco. It found that, by fifth grade, ELLs who had gotten waivers to remain in small bilingual programs were equally proficient in English and did just as well on state tests when compared with ELLs in English-only programs.

Ricardo Lara, a Democratic state senator from Los Angeles County, is the sponsor of the ballot measure. He calls it "an attempt to right a tremendous wrong".

He says the debate over bilingual education is different this time around.

"Californians know and value and understand the importance of having their students be multilingual, bilingual and multiliterate," he said recently. "And so we're removing those barriers and ensuring that we going to continue to have those dynamic programs in the state."

Under the measure, for example, school districts would still decide locally whether they want to expand bilingual education or not. English-only programs would remain, but parents would no longer need to sign a waiver to place their children in a bilingual program.

Opponents fear this would allow schools to transfer ELLs to a bilingual classroom without the parent's consent.

Leading the charge against the bilingual measure is Ron Unz, the Silicon Valley millionaire who orchestrated the original ban in 1998. His campaign was inspired by a protest by immigrant parents in Los Angeles in 1996.

Back then, a group called Familias del Pueblo launched a boycott at the Ninth Street School in LA's garment district. Latino parents complained that, as much as they wanted their kids to continue speaking Spanish, only 1 percent of the students at the school knew enough English to transition out of the bilingual program.

Unz insists that bilingual instruction is ineffective and cheats ELLs of a quality education. He argues that ELLs need no more than a year of intensive English instruction before moving on to English-only classrooms, and that while challenges remain, those students today are better off.

Latino students "are doing much better than they had been doing 18 or 20 years ago," he says, "or that they would be doing if they weren't being taught English."

In the years after the ban, test scores for English Language Learners statewide improved considerably. Supporters interpreted it as powerful evidence that English-only was a better way to get ELL's to succeed, even if it meant that children would lose their Spanish.

Years later, the academic achievement and test scores of ELLs began to drop off. So much so that in 2015, a coalition of civil rights groups won a landmark case on against the state for failing to address the high failure rates of ELLs. State officials have since agreed to new monitoring procedures to ensure that districts provide the necessary services and interventions required under the federal Equal Educational Opportunities Act.

This time around, the bilingual debate has been much more muted than it was in the 1990s.

Ron Unz says the proposed initiative is likely to pass, thanks to upper-middle-class families who see bilingual instruction as a form of academic enrichment. 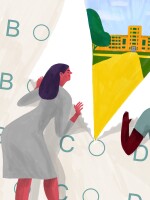