So what do you do if you're a Democrat running for re-election in a state that President Trump won by more than 35 points? That is the challenge facing Heidi Heitkamp, Democratic senator from North Dakota. She's being challenged by a Republican, Kevin Cramer. In that state, she's considered one of this year's most vulnerable Democrats. NPR's Kelsey Snell reports that in this campaign, Heitkamp is betting on bipartisanship.

KELSEY SNELL, BYLINE: Heidi Heitkamp is the kind of politician who lives for parades and county fairs. But she draws a line at the dunk tank.

HEIDI HEITKAMP: No, I'm not going in there. I did that once.

SNELL: From the moment Heitkamp arrived at a festival sponsored by the West Fargo Police Department, she was shouting greetings to volunteers and taking selfies. But she wasn't going in the tank.

HEITKAMP: People were having way too much fun.

UNIDENTIFIED PERSON #1: Every time, you're going down. Right?

HEITKAMP: I know. Oh, yeah. Add even if they don't hit it right, they still go over and press the button.

SNELL: Just a few yards away, her opponent in this year's Senate race, Kevin Cramer, was waiting for a flag ceremony to begin. Cramer and Heitkamp often cross paths back at home while they campaign. And on this night, their differences could not have been clearer. Heitkamp is at home at events like these. Her charm and relatability are a kind of universal truth here. Cramer is subdued, a contrast confronted in the first five seconds of his latest ad.

SNELL: They were both elected to Congress on the same day in 2012, and Cramer likes to say there are voters out there who walked into a voting booth and checked the boxes next to both of their names that day. Now they're being forced to choose. Cramer's pitch is that he is a reliable Republican in an increasingly Republican state. He votes with the party on everything from abortion to taxes, and Heitkamp doesn't. And Cramer has President Trump to help him undercut Heitkamp's centrist message.

SNELL: Trump came to North Dakota to make the pitch that Cramer would provide a critical vote for the Trump agenda, including shifting the Supreme Court further to the right. And Cramer says voters know innately that he will do just that.

KEVIN CRAMER: It's certainly not a campaign theme. It's just something that, among our 300,000 voters and me and the intimacy that we have with each other, you know, they know I support President Trump and he supports me.

SNELL: That message resonates deeply with voters here, particularly as Democrats are fighting to prevent Trump's latest pick for the Supreme Court, Brett Kavanaugh, from being confirmed. That may be why Heitkamp voted for his last pick, Justice Neil Gorsuch, and she's defying party leaders to meet with Kavanaugh today. And sometimes, she directly embraces Trump.

HEITKAMP: I'm Heidi Heitkamp. And when I ran for the Senate six years ago, I said I wouldn't vote the party line because I don't think either party has all the right answers. That's why I voted over half the time with President Trump.

SNELL: Heitkamp knows there's a lot of support for Trump here. Still, she's staking her future on the belief that North Dakotans want a moderate, not a rubber stamp.

HEITKAMP: I guess if people want somebody who's going to vote for Trump a hundred percent of the time and the majority of people of North Dakota think that then, you know, that doesn't bode well for my re-election.

SNELL: But North Dakota's relationship with Trump is complicated. For one thing, farmers are anxious about Trump's aggressive tariffs and a looming trade war with China. Angy Bartlett is mayor of the small town of Courtenay. It's in the middle of miles of farmland, about two hours west of Fargo. While she is not a farmer herself, Bartlett says the tariffs are on everyone's minds.

ANGY BARTLETT: My livelihood comes from the farmers, so yeah. Yeah, we're concerned about all of that. The farmers are our bread and butter in these small towns in North Dakota. So we need to take care of them.

SNELL: Bartlett doesn't call herself a Democrat, but she is voting for Heitkamp this year. The tariff message helps. But Bartlett says she likes that Heitkamp is from a small town, cares about farmers and she's personable. The question is if enough people like that.

HEITKAMP: If someone like me can't get elected to the United States Senate because I'm too moderate, you know, I don't know what happens for governing later on.

SNELL: But Cramer thinks that the D after Heitkamp's name on the ballot will mean more in the voting booth than the warm feelings people have about her personality.

CRAMER: If you were to ask me what her biggest challenge is, it's damn near insurmountable without changing parties. She is a Democrat, and that is a nearly fatal political flaw in North Dakota right now.

SNELL: And this year's race will test whether the old-school style of county fair campaigning can defy the tribalism of politics in 2018. 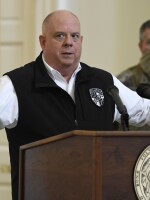