From NPR News, this is ALL THINGS CONSIDERED. I'm Robert Siegel.

One of the last remaining Navajo code talkers has died. During World War II, Keith Little served as a Marine sending messages encrypted in his native tongue. In recent years, he led the Navajo Code Talkers' Association. He was working to get a museum established. Keith Little died Tuesday at age 87 in Fort Defiance, Arizona.

Reporter Ashley Gross has this remembrance.

ASHLEY GROSS, BYLINE: Keith Little entered a federal boarding school at age 12. He spoke only Navajo. If he or his peers were caught speaking it, teachers would force them to write two sentences over and over again.

KEITH LITTLE: I will talk English. I will not talk Navajo. It didn't feel good to be punished, you know, in front of everybody.

GROSS: But then came the attack on Pearl Harbor and all of a sudden the complicated Navajo language was especially useful. Little joined the Marines and was soon pulled aside to learn the top secret Navajo code. Little remembered how an instructor would drill them for hours on the Navajo words that replaced military terms.

LITTLE: Eggs is bomb. So when he says eggs, he put down bombs. Or when he might say - he might yell out, turtle. Tank.

GROSS: Little fought in the Marshall Islands, Saipan and Iwo Jima. That's where he watched one of his friends get blown up.

LITTLE: All kind of thoughts come to you. I wonder how his parents are going to take it. I wonder if he would have become a good father and a grandpa and things like this, you know.

GROSS: Michael Smith is court clerk of the Navajo Nation Supreme Court and son of another code talker, Jesse Smith. He says Little dedicated his life after the war to helping young Navajos embrace their culture.

MICHAEL SMITH: He always wanted to try to do things for the children and for the language to preserve the language. He's an amazing man.

GROSS: Little said he was always asked why he fought for the U.S. when his people had been treated so badly.

LITTLE: The only proper answer to give is that this is our land.

GROSS: He came back to that land surrounded by scrubby desert and pinon trees and settled down with his wife Nellie. 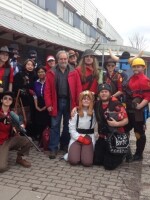 Ashley Gross
In July 2017, Ashley Gross became KNKX's youth and education reporter after years of covering the business and labor beat. She joined the station in May 2012 and previously worked five years at WBEZ in Chicago, where she reported on business and the economy. Her work telling the human side of the mortgage crisis garnered awards from the Illinois Associated Press and the Chicago Headline Club. She's also reported for the Alaska Public Radio Network in Anchorage and for Bloomberg News in San Francisco.
See stories by Ashley Gross
Latest Stories
Support news that matters in Kansas City
KCUR serves the Kansas City region with breaking news and powerful storytelling.
Your donation helps make non-profit journalism available for everyone.
Donate Now