Thousands are crowding the banks of the Thames today to catch a glimpse of Queen Elizabeth leading a flotilla of a thousand boats to mark her 60-year reign.

Her gilded barge is the centerpiece of what organizers are calling the biggest pageant on the river in 350 years. As NPR's Philip Reeves reports from London, a 41-gun salute echoed over the city this morning, launching what will be several days of festivities.

Pageant Master Adrian Evans has been planning Sunday's event for two years, as he told Reeves:

"It's a piece of theater on the water, and we mustn't forget that. It's not simply a question of boats. There are 10 music barges, a fabulous belfry at the front. We've got the London Philharmonic Orchestra at the back, and in the middle, we've got bagpipes, we've got brass bands. We've got all sorts."

The 86-year-old queen sails in the royal barge with her husband, Prince Philip as well as Prince William, his wife, Catherine, and his brother, Prince Harry. The armada includes more barges, pleasure craft, tugs, steamers, naval boats, tallships, kayaks — and the vessel that, at his state funeral, carried the coffin of Winston Churchill, the prime minister when Elizabeth took the throne 60 years ago.

The barge itself, as NPR's Larry Miller reports, began life as a River Thames sightseeing boat. It took six painstaking months to refit it for royalty, but now the 210-foot-long Spirit of Chartwell has been lavishly decorated with replica carvings. Not even the morning's cold, dripping rain could dampen the color scheme of red, gold and purple, resembling the royal barges of centuries past. 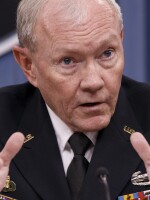