States To Use U.S. Immigration List For Voter Purges

The states, including some with large Latino populations, are following Florida, which last week reached its own pact with the Department of Homeland Security to use a database that contains information about immigrants who are in the U.S. legally. The states' efforts had initially been blocked by DHS until the agency relented.

At a gathering Monday in Puerto Rico of the National Association of Secretaries of State, elections officials from many of the states opened talks with DHS officials who oversee the database, known as SAVE, or Systematic Alien Verification for Entitlements.

The SAVE system is expected to help states distinguish between foreigners living in the U.S. on visas, green cards or other permits, and others who have become naturalized citizens and now have the right to vote.

"I think they are taking their responsibility seriously and want to help us," Colorado Secretary of State Scott Gessler said after his discussions with DHS officials. "It definitely will help us address vulnerabilities in the voter rolls."

Gessler is among Republican elections officials in 10 states — including the expected battlegrounds of Colorado, New Mexico, Nevada, Michigan and Ohio — that closely monitored the Florida case as a bellwether for their own requests to use the federal database.

It definitely will help us address vulnerabilities in the voter rolls.

Florida filed a lawsuit against DHS to gain access to the database. The Justice Department sued to block Florida's voter-purge program, arguing that it violated federal voting rights laws. Once a federal judge ruled against the Justice Department, upholding Florida's right to review voting records for noncitizens, DHS reversed itself and agreed to grant the state access to SAVE data.

DHS also denied Colorado access to the data last year. Gessler says he now will use the data to update the citizenship status of about 5,000 registered voters identified through driver's license records as noncitizens as far back as 2006. He says roughly half of them have cast ballots in the past few years.

Many Republican-led states and the Obama administration continue to fight over the issue of voter eligibility, which could heavily influence turnout in the presidential election.

Republicans say voter purges and other restrictions, such as photo identification requirements for voters, are intended to prevent fraud. Democrats argue that the measures are designed to suppress turnout among minorities and others who tend to vote for Democratic candidates.

Some of the states with the most aggressively tightened election laws, such as Florida and Texas, also have experienced large increases in their Latino populations.

The Department of Justice and voting and civil rights groups have filed numerous lawsuits against states, claiming that voter ID and other laws would disenfranchise minority and poor voters.

Until now, many of the states have drawn criticism for using flawed methods that ensnare too many eligible voters instead of suspected noncitizens. Voting rights groups say voter purges this soon before an election could leave too little time to find and correct errors on the rolls.

"The more these [federal] databases are made available to states, the lower the already tiny probability is that a U.S. citizen would be [improperly] identified," said Kansas Secretary of State Kris Kobach, whose agency also plans to use the immigration database.

Florida officials' own efforts to verify the citizenship of roughly 2,700 registered voters have yielded confirmations that several hundred of them actually are citizens. A Miami Herald report found that the list of potential noncitizens "disproportionately" flags minorities: nearly 60 percent are Latinos, who make up 13 percent of Florida's active registered voters.

"It's a relief if they are going to use the proper data now, but it still doesn't make sense that 60 percent of the people on the list have Latino surnames when we obviously are not 60 percent of the inhabitants of this state," Jose Balasquide, the Florida director for Mi Familia Vota Education Fund, said. "If you say you have reasonable doubt to believe that somebody isn't a citizen, the citizen is going to be feeling uncomfortable." 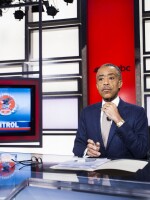