The medical school and hospital system at Johns Hopkins University said in a statement, "We take very seriously the questions raised" in the reports.

CPI and ABC focused on Dr. Paul Wheeler, who heads a unit at John Hopkins Medicine that reads X-rays of coal miners seeking compensation benefits for black lung disease. Wheeler has become a favorite X-ray reader for industry lawyers, according to the reports, because he "found not a single case of severe black lung in the more than 1,500 cases decided since 2000 in which he offered an opinion."

The investigations also found that other experienced X-ray readers disagreed with some of Wheeler's analyses. In some cases, miners who could not obtain benefits due to Wheeler's conclusions and later died were positively diagnosed by other medical personnel based on autopsy results.

Wheeler defended his works, telling CPI and ABC that "I've always staked out the high ground."

Johns Hopkins Medicine said in its statement that Wheeler "has consistently retrained, retested and recertified" as a black lung X-ray reader with the National Institute of Occupational Safety and Health.

Two Democratic U.S. senators from coal mining states responded to the reports with calls for corrective legislation. Sen. Jay Rockefeller of West Virginia told ABC the revelations are "a total, national disgrace." Citing "troubling concerns" in the reports, Pennsylvania Sen. Robert Casey said, "It is imperative that miners receive fair treatment and are not victimized at any point in the system."

In a general defense of its black lung program, Johns Hopkins said, "To our knowledge, no medical or regulatory authority has ever challenged or called into question any of our diagnoses, conclusions or reports resulting from the pneumoconiosis [black lung] service."

CPI also reviewed the work of the coal industry's "go-to" law firm for black lung cases, finding instances in which the firm withheld evidence of the disease while fighting miners' claims. The law firm, Jackson Kelly, declined requests for comment but has argued in court filings "that there is nothing wrong with its approach," according to the CPI report. 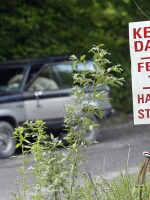