Another matter that's been churning through Congress has been the nomination of Loretta Lynch. Five months after being nominated for attorney general by President Obama, Lynch was confirmed by the Senate yesterday and could be sworn in as early as Monday. NPR's Juana Summers reports that the long delay was largely due to politics.

JUANA SUMMERS, BYLINE: Republicans have long been ready for a replacement for Attorney General Eric Holder. But in President Obama's pick, Loretta Lynch, they didn't quite like what they got. Some Republicans said they couldn't back Lynch because she supported President Obama's executive actions on immigration. Others questioned whether she would operate independently of the White House. Alabama Senator Jeff Sessions urged fellow Republicans to vote no.

SUMMERS: Most recently, Senate Republicans led by Majority Leader Mitch McConnell delayed a vote on Lynch until the Senate voted on an unrelated human trafficking bill. That process dragged on for weeks, as lawmakers fought over antiabortion language in the measure. Even with that roadblock gone, most Republicans continued to oppose Lynch. One was Texas Senator Ted Cruz, who is running for president. He was the only senator who didn't vote on Lynch's nomination, citing a scheduling conflict. But he was clearly looking ahead to 2016.

SENATOR TED CRUZ: There are more than a few voters back home that are asking, what exactly is the difference between a Democratic and Republican majority when the exact same individual gets confirmed as attorney general, promising the exact same lawlessness?

SUMMERS: But in the end, several Republicans, including Majority Leader McConnell, voted for Lynch. Democrats, including leader Harry Reid, slammed the long road to confirmation while defending Lynch's accomplishments.

SENATOR HARRY REID: She's as qualified a candidate as I've ever seen during my time in the Senate, which is more than three decades. 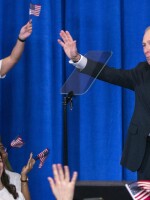 Juana Summers
Juana Summers is a political reporter for NPR covering demographics and culture. She has covered politics since 2010 for publications including Politico, CNN and The Associated Press. She got her start in public radio at KBIA in Columbia, Mo., and also previously covered Congress for NPR.
See stories by Juana Summers
Latest Stories
Support news that matters in Kansas City
KCUR serves the Kansas City region with breaking news and powerful storytelling.
Your donation helps make non-profit journalism available for everyone.
Donate Now