Not Ready To Stop Obsessing Over Beyoncé And 'Formation'? We Got You

When the video dropped on Saturday, we galvanized. Cleared our schedules, watched on repeat till our eyes turned red. Got into screaming matches with loved ones about what kind of hot sauce belongs in a #swagbag. Even made preemptive Valentine's Day reservations at Red Lobster, because you never know.

Then came Sunday's performance. You thought the Broncos won the Super Bowl? Not so much. Beyoncé stepped onto the field and annihilated, and we were all left in the wreckage, paper fans limply hanging from our wrists, trying to make sense of it all.

Now it's Day 3 of this post-"Formation" world, and it's time to dust ourselves off, sort through the emotional rubble, and begin the rebuilding process. We've fired up Tweetdeck, blinked to let our eyes readjust, and stepped gingerly into the information phase. It's time for links.

To begin with, we wanted to better understand why this video feels so important. What is it, precisely, that makes these visuals so compelling, so urgent, so politically now? We came across a fabulous essay from Zandaria Robinson of New South Negress that helps set the scene:

"Bodies are quiet, awaiting animation, and then they pulsate, loudly: in parking lots, in drained swimming pools, in streets, atop horses, in front of a police line, in a church, in a second line, in a parlor, in mirrors. Beyoncé places her own reckless, country blackness — one of afros, cornrows, and negro noses, brown liquor and brown girls, hot sauce, and of brown boys and cheddar bay biscuits — in conversation with and as descended from a broader southern blackness that is frequently obscured and unseen in national discourses, save for as (dying, lynched, grotesque, excessive) spectacle. Through this reckless country blackness, she becomes every black southern woman possible for her to reasonably inhabit, moving through time, class, and space."

The video itself would have been enough, but seeing Beyoncé and her crew perform the unapologetic black anthem at the Super Bowl was something else entirely. In a way, we marveled at her ability to get away with it. Carrie Battan of The New Yorker had some insight:

"[Beyoncé] did not dilute "Formation" like she could have, belting some of its most forceful lines with glee: "My daddy Alabama / Mama Louisiana / You mix that Negro with that Creole, make a Texas BAMA!"

And yet the performance didn't feel purely like an act of subversion. Part of Beyoncé's gift — and what has been necessary for her total dominance in the mainstream — is her ability to float provocative themes on giant platforms while retaining her megawatt star-power appeal. This is a political song, yes. Beyoncé's backup dancers were sporting outfits that made reference to the Black Panthers. But it was performed with such showmanship that I'm sure many American halftime-show viewers, those who were not paying obsessive attention to the "Formation" video, were none the wiser."

The timing of the debut was obviously no accident, but it wasn't just about the Super Bowl. Writer and filmmaker dream hampton explains in an interview with NPR's Mandalit del Barco:

"[Beyonce] dropped ["Formation"] very intentionally on a weekend that means something to the current movement. It is, of course, Black History Month, February, but that was Trayvon Martin's birthday, and the day before Sandra Bland's [birthday]. I mean, this is a generation that was kind of woke up by the Trayvon Martin killing, in terms of activism, in terms of being kind of nudged out of their post-racial slumber. And I think it was really significant that she dropped the video on Trayvon's day."

We were feeling pretty good about all this, when some disturbing comments made their way into our newsfeeds. Apparently, some people weren't all that pleased with "Formation." They thought it was too combative, too political, too black. Folks on Twitter called Beyoncé racist for not including white backup dancers in her Super Bowl lineup.

Rep. Pete King, a Republican congressman from New York, got in line, citing the video's depictions of police in riot gear and the outfits on display at the Super Bowl:

"Beyoncé may be a gifted entertainer but no one should really care what she thinks about any serious issue confronting our nation. But the mainstream media's acceptance of her pro-Black Panther and anti-cop video "Formation" and her Super Bowl appearance is just one more example of how acceptable it has become to be anti-police when it is the men and women in blue who put their lives on the line for all of us and deserve our strong support."

blogger Melissa Hillman had a powerful response to this line of thinking in a post titled White People: Shut Up About Beyoncé:

"In this cultural moment where powerful, mainstream Black artists like Beyoncé are telling their stories on their own terms, the white people who controlled the narrative — including how and when Black stories have been told — for the past 400 years need to sit back, shut up, and listen, listen, listen. You don't like how white people are being portrayed? Spend some time thinking about why Black artists are portraying white people that way instead of demanding they adjust their stories to conform to your self-image as "the good guy." We are not the heroes in these stories. We are not the intended audience. We are irrelevant, and there's nothing people in power hate more than to be made irrelevant, but the fact remains that these are Black stories, by, for, and about Black people. You don't like it? Don't watch. But I recommend that you do, and give it some real thought. This is their truth. You do not get to dictate how Black artists see or portray their own lives."

We would be remiss not to place "Formation" within the larger conversations about Beyoncé, and her music, in recent days. Janell Hobson of Ms. Magazine reminds us that just days ago, many of us were calling out Beyoncé for cultural appropriation in her Coldplay collaboration "Hymn for the Weekend." Where does that fit in?

"It would be a mistake to view "Formation" as somehow more authentic than her performance as a Bollywood star in the recent video for Coldplay's India-set "Hymn for the Weekend." Accusations of cultural appropriation tend to be superficial since they do not capture the nuances, complexities and messiness of how art encounters, collapses and syncretizes the cultural differences that confront a multiracial world. Not to mention how, in "Formation," Beyoncé suggests that blackness is itself performative, as represented by Mardi Gras costumes on display. There are layers to masking and unmasking.

However, in a year that has witnessed #OscarsSoWhite, in which actors, screenwriters and filmmakers of color are often ignored or whose stories are whitewashed, the question of who has access to larger cultural platforms matters. The local artists featured in Beyoncé's new video could not reach the Super Bowl audience without her intervention. And in a world that continues to decry women's power or black power, being able to boldly claim "I slay" is a radical form of resistance. Even more radical is her willingness to move towards an old black-club-women tradition of "lifting as we climb": "Now we gon' slay."

Beyoncé may have traveled the world and tried on different costumes of appropriation, but here in this moment, she has come back "home" to conjure up some magic in reclaiming all black souls and all black lives."

And at the end of the day, we're all in on this meditation by Marquita Harris at Refinery 29, who sums up why Beyoncé's performance is such a source of awe, even for people who might not like it:

"Beyoncé's cocky, unabashed declaration of self-love in her music is not to be taken lightly. Love her or hate her, in an environment that constantly tells women what they can and cannot do, how they should and shouldn't act, seeing one of our own beat the odds — over and over and over — is forever inspiring. And actually seeing a Black woman peacock for the world? It's beyond inspiring."

Still have questions after reading through all of this? Feel free to watch the video a few hundred more times. It's not going anywhere: 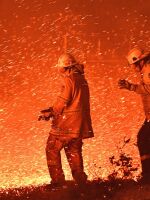 Leah Donnella
Leah Donnella is an editor on NPR's Code Switch team, where she helps produce and edit for the Code Switch podcast, blog, and newsletter. She created the "Ask Code Switch" series, where members of the team respond to listener questions about how race, identity, and culture come up in everyday life.
See stories by Leah Donnella
Latest Stories
Support news that matters in Kansas City
KCUR serves the Kansas City region with breaking news and powerful storytelling.
Your donation helps make non-profit journalism available for everyone.
Donate Now