This post will be updated as new information becomes available.

Two black women at the University of Missouri say they were called a racial slur during a confrontation with white students outside the Delta Upsilon fraternity house Tuesday night.

According to a statement from the university's Legion of Black Collegians, a group of white students passed the two women and a member of the group called the women a racial slur. Members of the legion and university police were arriving to assess the situation when the statement says members of the Delta Upsilon fraternity began recording interactions between the police and black students while shouting slurs and obscenities.

“It is often said that history repeats itself," the legion's statement reads, "but the ignorance that occurs on the University of Missouri’s campus always seems to be too familiar.”

In a written statement, Interim Chancellor Hank Foley said he was “outraged and saddened” to hear of the incident.

"We have zero tolerance for actions like this," Foley said.

A separate release from the University of Missouri News Bureau Wednesday afternoon reported that the university's Delta Upsilon chapter has been temporarily suspended. The fraternity's international organization has also placed it on suspension.

The university says it is still investigating individual students involved in the Tuesday night incident, and that those found in violation of Student Code may be subject to discipline, including suspension.

Students met at the Gaines-Oldham Black Culture Center on Wednesday evening for a town hall discussion about the incident.

Members of the Panhellenic Association, the Interfraternity Council, the University Police, faculty and administrators including Mike Middleton were in attendance. The Legion of Black Collegians tweeted that MU Counseling Center employees were also there to provide counseling services for students.

Najeebah Hussain, the chair of the MSA Senate Social Justice Committee, said the meeting was an opportunity for rarely-heard voices to share their thoughts.

“It’s raw. Multiple people cried. You see what people are dealing with firsthand and how it’s affecting them,” Hussain said.

Hussain also said that much of the discussion focused on keeping Greek life accountable and putting in place policies that would prevent similar incidents in the future.

The Interfraternity Council and the Panhellenic Association both released statements on Wednesday afternoon condemning the behavior of the Delta Upsilon members.

Sean Earl, MSA President, said the administrators’ quick response and presence at the meeting shows slight improvements have been made, but that “severe consequences” are necessary going forward.

“This is a situation that affects every student on this campus, not just black students,” Earl said. “We need to realize that how we treat each other ultimately determines how our university is set up and how we operate as an institution.” Nathan Lawrence
Nathan Lawrence comes to KBIA as a recent graduate of Lawrence University (no relation), where he studied English, Film Studies and Gender/Ethnic Studies. When not at KBIA, he works to hone his skills in photography, filmmaking and data journalism.
See stories by Nathan Lawrence 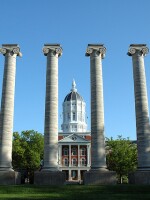 Riley Beggin
Riley comes to KBIA from Minneapolis after a four-year stint in Madison, WI, where she ate cheese curds and read about history. She is now a second-year graduate student at the University of Missouri School of Journalism she studies investigative and radio reporting.
See stories by Riley Beggin
Claire Banderas
Abby Ivory-Ganja
Latest Stories
Support news that matters in Kansas City
KCUR serves the Kansas City region with breaking news and powerful storytelling.
Your donation helps make non-profit journalism available for everyone.
Donate Now
Related Content