A couple of issues are dominating the news today. The protests by NFL players in response to comments made by President Trump is certainly one of those issues. We'll tackle that later this hour. But we're going to start with another major story, the Republican effort to repeal the Affordable Care Act, so-called Obamacare. The GOP only has a week left to pass a health care bill without needing votes from Democrats, but it's not clear that they will be able to get enough Republicans on board to pass this latest effort. The current legislation under consideration would drastically dismantle the ways in which millions of people have gained insurance coverage under Obamacare, and it would transform the Medicaid system, ending its structure as an open-ended entitlement program.

Because this would be such a drastic change, affecting so many people, we decided to spend much of our program tonight looking at the health care system - the current bill in the Senate, the single-payer idea. And we'll also look at what could be done if the Republican effort fails. And I'd like to begin with two of our reporters who've been following this story closely. NPR's Alison Kodjak covers health policy. And NPR's Scott Detrow covers Congress. They're both here with me in the studio. Welcome to you both. Thanks for coming in.

MARTIN: So, Scott, let's start with the state of play. On Friday, John McCain of Arizona became the second Republican senator to oppose the bill. Rand Paul earlier said he won't support it. That means if any other Republican senator comes out against it, it can't proceed. Where do things stand?

DETROW: Things do not look good for the bill's fate at the moment. Susan Collins has been a key Republican skeptic of the repeal effort all along. She is not quite an official no yet, but she said today it's difficult to envision a scenario where she votes for this bill. And there are more critics emerging. Ted Cruz said today he's not a yes at this point. And this is the same problem Republican leadership has faced all along with this narrow margin. Anything that makes a Ted Cruz happier makes a Susan Collins on the moderate end of the party less happy.

MARTIN: So, Alison, talk us through the bill, if you would. And just take us through step by step, you know, the key points, how it affects the exchanges that people have already gotten their health insurance through because of Obamacare and also the Medicaid expansion.

KODJAK: Well, Michel, it gets rid of both of those things, along with most of the other major components of Obamacare. There will be no more subsidies to help people buy insurance. There's going to be no more individual mandate to require people to buy insurance. And then they're going to take all the money from these programs - from the Medicaid expansion, from the exchanges and those subsidies - and put it in one big pot and distribute it to the states as block grants where they can set up their own health care systems.

MARTIN: So what about the traditional Medicaid program that many people might be familiar with? It's the states and the federal government, both contribute to take care of people who are usually, you know, low income, the disabled, seniors and others. What happens to that?

KODJAK: Yeah. That's a - there's a huge restructuring plan in that program. And that's a huge program, like you said. It covers tens of millions of people. Right now, Medicaid pays for whatever care the people in the program need and the federal and state governments split the cost. There's no limit, and that's exactly what worries Republicans. It's growing to be a bigger part of our federal budget. This bill would instead put a cap on that spending. The federal government would give each state a set amount of money per person in the Medicaid rolls, and that means less money over time for the program, less money for people's care.

MARTIN: And what about this big question of pre-existing conditions, whether those would be covered or not? Remember, there have been a lot of - I don't know how to put this - kind of arguments...

KODJAK: There's a lot of back forth (laughter).

MARTIN: A lot of back and forth over this.

KODJAK: Well, it's complicated. There's definitely language in the bill that says, yes, we will cover pre-existing conditions, but it's pretty vague language. And most experts say it doesn't offer the strong protections that are now in place under Obamacare, what people think of as their protections. It allows - this bill allows states, and even encourages them, to ask for waivers that get out of those rules.

So if you're in a state that gets one of those waivers, an insurance company could charge you more if you have a pre-existing condition and could make your insurance out of reach. Or they could eliminate certain kinds of coverage from their policies like, say, mental health care, which is a problem. If you're the person with depression, you can get a plan, but it might not cover the care you need.

MARTIN: So, Scott, let's talk about process. I mean, Senator McCain said that he could support this legislation if it were the product of hearings and public debate. I mean, people who went to middle school, you know, remember that this was the way they thought legislation actually, you know, proceeded at this level. Well, the Senate Finance Committee is going to hold a hearing about it tomorrow. Do you think that this would meet Senator McCain's call for what's called regular order?

DETROW: I don't think it would. It does not change the fact that this is being done on a tight deadline with little time to analyze something that would fundamentally reshape huge chunks of the American economy. McCain wants a bipartisan process, something that begins at the committee level, something that's collaborative. And, frankly, that's not the way the repeal effort has gone since the beginning this year.

MARTIN: I think people who follow the earlier debate remember that it was painful for Republicans in the Senate and for the president when the last bill failed in the middle of the night in July. If they aren't sure that they have the votes, is the Senate majority leader, Mitch McConnell, going to bring it up on the floor?

DETROW: I think there's a good chance that he still does because you have to remember that Republicans are under tremendous pressure from their core base of supporters to repeal Obamacare. And you have this situation where basically every major health care and insurance advocacy group is opposing this bill. But the feeling all along this year from Republicans on Capitol Hill is that they have to repeal Obamacare because they've spent years talking about it, campaigning on it. Iowa Senator Chuck Grassley was very blunt about that in a call this week with reporters. Here's what he said.

CHUCK GRASSLEY: I could have - maybe give you 10 reasons why this bill shouldn't be considered, but Republicans campaigned on this so often that we have - you have a responsibility to carry out what you said in a campaign. That's pretty much as much of a reason as the substance of the bill.

DETROW: So there you go. And the thinking is that a vote that fails could show donors and base voters, hey, we're really trying here.

MARTIN: Is that as much of a reason as the substance of the bill? Do other members of the caucus share that point of view? You've got about 30 seconds, Scott.

DETROW: I think you've had a lot of Republican senators say, especially talking on background off the record, they're really worried about not getting this done, that that could really hurt them in elections next year.

MARTIN: That is NPR's Scott Detrow, who covers Congress and NPR's health policy correspondent, Alison Kodjak. They were both nice enough to come here on a Sunday and talk about this. Thank you so much for speaking with us.

DETROW: Thanks for having us.

KODJAK: Thanks so much, Michel. Transcript provided by NPR, Copyright NPR. 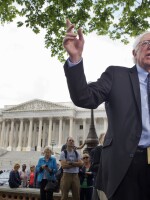