He may not be a household name in his hometown yet, but The Pradagy wants to share his Kansas City roots with the hip-hop world. After a decade hiatus, he’s hoping some recent successes could help him do just that.

Tucked away in Lenexa’s Chapter 2 Recording Studio in July, rapper Alan Wayne Williams, known onstage as The Pradagy, was locked in.

Despite the fact it was closing in on 11 p.m., their energy converged seamlessly and their communication seemed telepathic. The pair have been collaborating on and off since 2002.

“This album came out of necessity,” Pradagy said, tying its trajectory to his career’s recent unprecedented success. “We're treating this almost like bait to see what needs to be done next.”

In March, Pradagy played the South by Southwest music festival in Austin, Texas — the biggest gig of his career. Now, the Kansas City native is thirsty to showcase his eccentric rhymes for the rest of the world.

“I have no reason not to believe that it's going to keep going that direction and, you know, bigger and better each time,” he said.

During a prior listen back to the album’s first single, “Hustle All My Life,” Rebeck had noticed something missing from the beat — a tone that should have been there but wasn’t.

“Shout out to Rob” said Pradagy. “It was his ear on the engineering side of it, and that's my engineer to this day. ”

“I'm thinking it might be overkill, but then we listened to the song again and I couldn't unhear it,” Pradagy said, clearly sold on Borth’s musicianship. The instrumental phrase reminded him of the legendary Motown studio known as “Hitsville U.S.A.”

“G showed up and showed out,” he said.

The single, Pradagy hopes, will win over those Kansas City hip-hop fans who have historically shown more enthusiasm for out-of-town artists.

While the city's national profile has grown on the sports scene, for instance, or for remote workers looking for a low cost of living, it's still one of the most underrated hip-hop scenes in the country, according to the culture website Complex.

Kansas City’s most notable rapper is Tech N9ne, who was an early influence on Pradagy’s style and cadence. Tech N9ne is also credited with developing Kansas City’s variation of the “chopper” rap style, a hallmark of Pradagy’s sound as well.

“The first live performing art that I ever saw was Tech N9ne rapping in the backyard at a gathering … beating on his chest,” Pradagy remembered. “He was the first person I ever saw rap, period!”

But Pradagy has adapted his own “chopper” style, setting himself apart with classic hip-hop lyricism.

“It's a lane of my own. It's very uninfluenced, very unintentional,” he said. “I’m trying to change the narrative.”

Pradagy also wants to infuse his sound with other Kansas City signatures, blending hip-hop with jazz and classical music.

His goal is to embody the rich history that shaped his intellectual curiosity and passion for reading, particularly the knowledge he gained from educators at Lincoln College Preparatory Academy, consistently ranked as one of Missouri’s top high schools.

Perched atop a hill at 21st Street and Woodland Avenue, the school overlooks downtown, and the capital of American jazz, the 18th and Vine District.

For Pradagy, it was a safe haven from a periodically chaotic home life, and the foundation for his artistry.

“I got a lot of my everything from Lincoln,” he said — including his stage name.

“I had a sophomore English teacher. Ms. Scaggs was her name, I believe. She knew I was a writer, into poems and things like that, and she had got her hands on some of my stuff,” Pradagy recalled. “She's the one who told me I was a prodigy.”

Another Lincoln teacher pushed him to take his talents to the stage.

“A drama teacher, Ms. James,” he said. “I used to rap in there all the time and she … knew I was good. It was her who put me on stage and made me do what I was doing in the class for the school. That ovation changed my life.”

Those experiences help explain why, 20 years after his graduation, Pradagy seized an opportunity to come back to Lincoln and support the school’s 2021 “Blacknificent” fundraiser, which helps Black, college-bound seniors. The effort raised $13,000.

Despite his deep ties to Kansas City, Pradagy wasn’t well known here until recently. Slowly but surely, Pradagy’s local fan base has begun to blossom.

Riding the wave of success that started at South by Southwest this spring, he performed in July at miniBar, near Westport.

Aaron Saunders, who had heard of Pradagy from his work with Tech N9ne, was among the small crowd there to celebrate him.

“When I heard him spit his music and I (saw) the show, I was like, ‘That dude is crazy,’” said Saunders. “I got to let him know that I've been hearing his music, and that Kansas City supports him.”

For Pradagy, feedback like that can only be encouraging. As Kansas City’s growth into a global destination continues, he is hoping he can be the voice that leads newcomers toward its distinctive hip-hop culture. 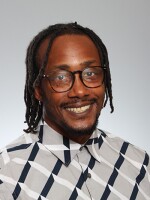 Lawrence Brooks IV
As a KCUR news intern, I want to provide nuance and context to the political, cultural and sociological issues that divide us. After a decade with the U.S. Navy as an engineer, sailing to four continents and many island nations, I strive to show humanity’s many similarities instead of our perceived differences. I’m a passionate lifelong learner eager to cover whatever comes my way.
See stories by Lawrence Brooks IV
Overlooked
A new podcast from KCUR investigating Roger Golubski and corruption in the Kansas City, Kansas, police department.
Subscribe now
Latest Stories
Support news that matters in Kansas City
KCUR serves the Kansas City region with breaking news and powerful storytelling.
Your donation helps make nonprofit journalism available for everyone.
Donate Now