By NPR Staff and Wires

General Motors is advising Chevrolet Volt owners to return their electric cars to dealers for repairs that will better protect the vehicles' batteries, which have caught fire after crash tests.

The repairs fall under a "customer service campaign," which is similar to a safety recall but allows GM to avoid the bad publicity and federal monitoring that come with a formal recall.

Dealers will add steel to a plate that protects the Volt battery, spreading the force of a crash over a larger area, says Mary Barra, GM's product development chief. GM and federal safety regulators say that tests have shown the repairs stop penetration into the battery and prevent coolant leaks.

GM has a huge incentive to fix the problem and protect the image of the Volt, which isn't a big seller — it has fallen short of sales goals — but it burnishes GM's image as a greener, more innovative carmaker.

Jack Nerad, an analyst for Kelley Blue Book, says the Volt is what's referred to in the car business as a "halo car," or an emblem of everything GM is and wants to be.

"Any question about the Chevy Volt is bad news for GM," Nerad says. "Even if this is a minor problem, or a problem that is very, very unlikely to happen to a consumer, it's still not good news."

The Volt is where GM has staked its reputation and ad dollars, he says. Michael Robinet, an analyst with IHS Automotive, says GM is making a smart move by getting ahead of the game.

"They take it very seriously that they want to make sure that they're putting the very best vehicle out," he says.

Though it isn't the largest recall, the Volt's status has attracted a considerable amount of attention, he says. "There's recalls that involve tens of hundreds of more vehicles than this does, but interestingly, you don't get phone calls about those."

GM and the government both stress that there is no immediate danger to Volt drivers. "We have made the Volt even safer," Mark Reuss, GM's North American president, said Thursday.

GM says it wasn't forced by the government to repair the car. The automakers and the National Highway Traffic Safety Administration — the federal safety agency — say no fires have broken out after Volt crashes on real-world roadways.

NHTSA began studying the Volt batteries after a car caught fire in June at a test facility in Wisconsin, three weeks after a side-impact crash test. The agency opened an investigation into the Volt's safety in November following that fire and two others that occurred after crash tests.

Then, in late December, the agency crashed a Volt with the added steel. "The preliminary results of the crash test indicate the remedy proposed by General Motors today should address the issue," NHTSA says. The agency says it will monitor the car for another week and will continue its investigation.

GM said the Volt's battery should have been drained after crashes, but it never told NHTSA to do that. Later, two GM executives said the company had no formal procedure to drain the batteries until after the fire.

The company now sends out a team to drain the batteries after being notified of a crash by GM's OnStar safety system.

The Volt has a T-shaped, 400-pound battery pack that can power the car for about 35 miles. After that, a small gasoline generator kicks in to run the electric motor.

NPR's Sonari Glinton contributed to this report, which contains material from The Associated Press 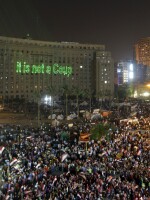