Now the story about one woman's effort to bring attention to the invisible wounds of war. The playwright Kate Wenner says she was stunned by investigations that showed thousands of U.S. troops were coming home from Iraq and Afghanistan with traumatic brain injuries and didn't receive the help they need. So Ms. Wenner decided to raise awareness through art. She's written a play about troops with traumatic brain injuries.

NPR's Daniel Zwerdling went to a production and has this report.

DANIEL ZWERDLING, BYLINE: We are sitting in a tiny theater in Chicago, barely 100 seats. It's pitch black. First, you hear the wind.

ZWERDLING: Then soldiers' footsteps, then a glimmer of light over the stage. It's dawn and five soldiers spread out, in the desert.

ZWERDLING: And the stage goes black for another moment. This is the home of a theater company called Stage Left. They decided to showcase Wenner's play in their new drama festival. Now the lights come back up.

ZWERDLING: And the soldiers aren't in Iraq anymore. They're in a brain rehab unit. They're in a hospital back in the United States.

ZWERDLING: The wars in Iraq and Afghanistan have inspired dozens of plays. Most of them are about power, and politics and the brutality of war. Kate Wenner's play zeroes in on traumatic brain injuries. And she says she remembers the exact moment she decided to write it. She was filling her dishwasher at home in Massachusetts. The kitchen TV was on.

KATE WENNER: As I watched, there was this particular woman coming back from Iraq. I just remember she had a beautiful face, and her children were brought into the room, and she could not remember their names. And there was the metaphor for me. I mean here was in fact a woman who has lost her memory, but it made me think about how all of us lose our memories when it comes to the consequences of the wars we fight.

ZWERDLING: Wenner is short, intense. She used to be a journalist. She was a producer on "20/20," the TV news magazine. Every expose she worked on reached a national audience.

ZWERDLING: Then she left TV in the 1990s to write novels and now a play. And this time, her audience is tiny.

I think 99 people were in the theater.

WENNER: Mm. That's right: 99 people. I think people have become so inured to what they see on TV. You know, you see something on TV that has a great emotional impact on you. The next morning - I'm not by myself â literally, can't remember what it was. Now obviously, with a play, you don't get anywhere near the exposure, you know. But I've already discovered that when you're in a theater those people are more emotionally committed, you get to them much more profoundly than I ever saw with a television piece.

ZWERDLING: This scene is part of one of the main conflicts that runs through the play. It's January 2005 and doctors have started to warn the Pentagon, we've got a terrible problem here. We're seeing lots of troops with mysterious brain injuries. But back in 2005, a lot of officials don't believe it. An actress named Lisa Herceg plays the doctor who runs the rehab clinic. William Watt plays a Pentagon big-wig, who got her the money to run the clinic.

: (as Pentagon official) No, but I am in charge of your grant. They consider you my responsibility, especially when something seems out of line, like your claim that we could be looking at tens of thousands of undiagnosed brain injuries. Where the hell did you come up with a number like that?

ZWERDLING: Kate Wenner says she didn't know anything about troops and brain injuries when she decided to write this play. So she did what she knows best.

WENNER: I called people up and, of course, I said I'm working on a play, you know. Hmm, that doesn't have, give you the same entree as saying, hello, I'm from ABC "20/20." So that was a little bit of a hurdle, but I did. I just called all over the country trying to find people who would speak with me.

ZWERDLING: And it turned out a lot of people would speak with her. She went to California, Colorado, Minnesota, Tennessee, all with her own money. She met with Army doctors and soldiers, and their families, officials at the VA and Wenner blended them into the characters in her play. Like the angry doctor who speaks out, Dr. Fitch.

Is Dr. Fitch, the character in your play, Sandy Schneider?

WENNER: Well, you know, I interviewed about three doctors, but I would say mostly it was Sandy.

ZWERDLING: Sandy Schneider used to run the brain rehab program at Vanderbilt University's Medical Center, in Nashville Tennessee. They were treating soldiers from an Army base nearby, who had to struggle to get help. Wenner read an article about Schneider's work and she hopped on a plane to meet her. And now Schneider's come to the play, to see how Wenner portrayed her. I met with the real-life Sandy Schneider.

Dr. Fitch, the character in the play, is filled with indignation. She's furious with the Army. And you?

DR. SANDY SCHNEIDER: Was I? Oh, sure.

SCHNEIDER: Oh, I gave interviews to the press. Sure I did, and the military base said, you know, or the public affairs person said, we don't want you to do anymore interviews. And they really did try to shut it down.

ZWERDLING: And Sandy, and what were you telling the press?

SCHNEIDER: That the soldiers weren't getting what they needed.

ZWERDLING: But didn't you think it was a teeny bit weird that a playwright is coming to you?

SCHNEIDER: Actually I've thought about that several times, and my mother asked me this morning. She says, why a playwright? And I said, as many different ways as we can get that message out, get it out.

ZWERDLING: When the audience breaks at intermission, there's buzz. Ann Cadigan is heading toward the snack counter.

ANN CADIGAN: I mean it's very interesting. I actually I hadn't heard about the problem of traumatic brain injuries before this.

Anything in the play that you feel like you're learning that you didn't know before?

IRWIN BROWN: Yes. I come from the era of Vietnam, and so I saw all the cover-ups and I heard all the lies. And the truth of the matter is, I thought we learned some things since then.

ZWERDLING: Does the play grip you in a way a movie would?

CLEMENCIA: No doubt about it. It gripped me, totally, and I even told my daughter while we were watching it, I'm always amazed at how they bring their characters and make them so life-like that you believe every little thing that they say. I do.

ZWERDLING: But Wenner says please remember: this is a play. Yes, she based it on research, but she's taken literary license with the characters and their conflicts. And no, she did not call officials at the Pentagon like a journalist would, to get their side of the story.

NPR and ProPublica have been investigating these issues over the past two years and we've found evidence that tens of thousands of troops with traumatic brain injuries have fallen through the cracks. Military officials say they've launched programs recently to do a much better job, diagnosing and treating soldiers.

ZWERDLING: Wenner's play ran for three performances in Chicago, then it moved to Pittsfield, Massachusetts. And next the drama's scheduled to move to Colorado.

ZWERDLING: Wenner says she hopes that somebody in every audience will get a shock of recognition. Wait a minute. Maybe that's what's wrong with my brother, or sister, or neighbor, or a colleague who's come home from the wars. Maybe they have TBI. And her play will prod them to get help. The play is called "Make Sure It's Me."

SIMON: Tomorrow, we welcome a new colleague to the weekends. Rachel Martin takes the chair as host of WEEKEND EDITION SUNDAY. She'll have the news of the day and an interview with Defense Secretary Leon Panetta, and tough choices ahead as the Pentagon weighs half a trillion dollars in budget cuts. 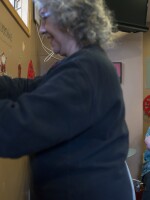