If you listen to commercial radio, this is not news: Katy Perry had a huge year. She went No.1 five times. She was the most played artist on the radio. But the record industry is so weird, it's hard to know whether this kind of success translates into huge amounts of money.

I walked over to Katy Perry's record label. She's on Capital, which is under EMI. I met Greg Thompson, executive vice president of marketing and promotion at EMI.

"Did you guys end up in the black?" I asked.

"I believe we did. Absolutely," he said.

Here's what EMI did say: "We invested substantially to make a great record."

What does "substantially" mean? I called up Andy Tavel, an entertainment lawyer. He's had clients like Mary J. Blige and the Cure. I ran into Dr. John in his lobby. Tavel helped me think through what EMI spent on Katy Perry.

The first expense is the album itself.

Why so expensive? Take "California Gurls." It features Snoop Dogg. He's pricey. And the producers on the song — Dr. Luke and Max Martin (among others), who charge around $100,000 per song. And there are 12 tracks on the album.

Then there's Katy Perry's advance. "That advance could have been perhaps a million dollars net, maybe $2 million — I can't say for certain," Tavel says.

So the record company has shelled out millions of dollars before anyone has even heard the album.

Next expense: Getting the album played on Top 40 radio. Tavel says it could cost up to $250,000 just to get the first single played on radio — special promotions, free merchandise and gifts.

For example: the painting of Katy Perry on one program director's wall. She's naked, wrapped in a cloud of cotton candy. (That's also the album cover image, but seeing it painted is somehow different.)

Tavel figures the album cost the label somewhere around $4 million.

They made all that — and much more — on the sales of Katy Perry singles.

"Being in the business of pennies," Greg Thompson, the EMI record exec says, "can actually be a good business."

Here's what Katy Perry sold in the United States: 2 million albums and 24 million digital tracks. That's not a lot of albums. That is a LOT of songs. At a dollar a pop.

Back to the back of the envelope: Let's say you bought "The One That Got Away" for 99 cents on iTunes. Thirty cents goes to Apple. Thirty cents goes to the songwriters (including Katy Perry). The label gets the rest. Perry has to pay back the recording costs and the advance out of her royalties.

By my estimate, the record-shattering, chart-topping Katy Perry made her label around $8 million in U.S. music sales. And that doesn't even count revenue from movie trailers, commercials or foreign sales.

But, Katy Perry notwithstanding, the record industry is still in trouble.

"The problem is, their batting average isn't high enough," Tavel says. "Those success stories like Katy Perry are unfortunately too few and far between." 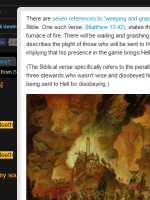 Zoe Chace
Zoe Chace explains the mysteries of the global economy for NPR's Planet Money. As a reporter for the team, Chace knows how to find compelling stories in unlikely places, including a lollipop factory in Ohio struggling to stay open, a pasta plant in Italy where everyone calls in sick, and a recording studio in New York mixing Rihanna's next hit.
See stories by Zoe Chace
Latest Stories
Support news that matters in Kansas City
KCUR serves the Kansas City region with breaking news and powerful storytelling.
Your donation helps make non-profit journalism available for everyone.
Donate Now