The sale or possession of liquor is strictly forbidden by the tribal government of the Pine Ridge Reservation in South Dakota. But there is a tiny town just over the border in Nebraska that does sell alcohol, in massive quantities, and mostly to tribal residents.

And now a longstanding battle over beer sales has spilled into federal court.

Tribal elders are revered in this culture, and 92-year-old Celia Martin greets people who pause to shake her hand in the Oglala Sioux Tribal headquarters. But she's quick to raise her fist in anger over the liquor sales in the nearby town of Whiteclay, Neb.

The roughly 25,000 residents who call the Pine Ridge Reservation home live in one of the poorest counties in the nation. Whiteclay, which has about 10 residents, sells the equivalent of 5 million 12-ounce cans of beer each year.

"I hate to see these young kids [get] killed over there by drinking," Martin says. "I've seen it."

John Black Bear Jr. is one of those who cross the border to escape the reservation's liquor laws. Setting down a 40-ounce can of beer on a gravel parking lot in Whiteclay, he says he's homeless. His eyes get watery when he speaks about his grandchildren, or thakoza in the Lakota language.

"I'm old enough to say that I have thakozas, and that's hard," he says. "It's hard to explain in this world because we're hurting one another."

A lawsuit filed by the tribe targets four major beer companies, along with regional wholesalers and local retailers. One goal of the litigation is to limit the amount of beer sold in Whiteclay. Nebraska Attorney General Jon Bruning says the state needs to stay out of this case.

"You shut down those folks in Whiteclay and they're going to go somewhere [else]," Bruning told Omaha radio station KFAB. "They're just going to be 20 miles on a state highway."

But Bruning quickly adds that he's no fan of those who sell beer in huge quantities on the reservation border, saying he despises the beer sellers in Whiteclay.

"The Oglala Tribe tried everything," says Tom White, who represents the tribe in the $500 million lawsuit. "They begged for over a decade to stop ... the illegal sales and nothing happened."

There are more than a dozen defendants listed in this case, but they all refused to be interviewed for this story. One attorney for Whiteclay's State Line Liquor Store says his client has done nothing wrong and is readying a full and vigorous defense.

Others, like Terryll Blue-White Eyes, disagree. She runs the tribe's substance abuse program and says they're making a lot of money off of people's misery.

"And they're not putting anything into helping with the problem at all," Blue-White Eyes says. "They're taking all their profits and laughing all the way to the bank while our people are suffering."

Traditional Lakota culture does not incorporate alcohol. Martin says one Lakota word for liquor is mnisica, which translates to bad water. She's determined to see liquor sales curbed in Whiteclay.

"I'm going to keep on keep on, keep on fighting it until I get my job done," she says. "That's what I'm going to do."

Tribal officials say they'll follow the elders' lead. There has been more than a decade of protest marches, encampments and blockades to stop alcohol sales on the tribe's border. The next phase of this fight is in federal court. 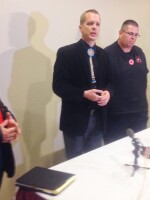