Going To The Games: A Spectator's View Of The London Olympics

To find out what the London Olympics are like for the average fan, we asked Morning Edition executive producer Madhulika Sikka — a Brit who's vacationing in London — to describe it for us. Sikka received tickets through the lottery.

Congratulations, you've secured tickets for an Olympic event, and London 2012 awaits you. So, what's it like to navigate a city that has been bracing itself for the throng of Olympic visitors?

I'm going to let you in on a little secret: London has been a great place to visit during the Olympics. The city hasn't come to a grinding halt. The weather has not been awful; the sun has even been shining. And London has put out the welcome mat.

London has gotten a lot right about these games, hard as it is for the early naysayers to admit. Here's the first thing they got right: Each ticket comes with a travel pass for the tube, London's Underground subway, for that day.

Obviously, this is to encourage people to use public transport. It also means you don't have to fiddle with buying a ticket before boarding a train. And, if your event doesn't last all day, you can use the travel pass all day — perfect if you want to go sightseeing. And it's a real bargain, given London's pricey subway fares.

Here's another thing they've gotten right: The signage has been fantastic. From the brand-new maps in trains, which have each Olympic venue marked so you know which station is yours, to directions for where you have to change trains for events outside London (sailing and rowing), to directions on the street when you emerge from the tube, there is no way you will not find your venue.

In a city the size of London, this is particularly useful. On a normal day, you would be hard-pressed to guess that when you emerge from the tube at the sleepy Southfields station, you're just a 15-minute walk from the temple of world tennis, Wimbledon. But not to worry: signage and helpful volunteers are there to help you along on your way.

Much has been made of the great chip controversy, and I'm not going to add to it. Suffice to say, it is true: You cannot get chips (a.k.a. "fries") without fish — at any Olympic venue.

But you can get plenty of other food, and I was pleasantly surprised to see that the prices were not extortionate. They're expensive, yes — but London expensive, not "you-are-in-a-restricted-area-and-must-pay-ridiculous-over-the-top-prices-for-everything-because-we-can-do-that-to-you" expensive.

If you've been to any major event at a stadium or arena in the U.S., you are used to paying an awful lot for a Coke. Why would the Olympics be any different? A cup of coffee is about $4, a pint of beer $7.

As for the security, it's present but not onerous. In fact, nobody stopped us bringing in our own provisions, except liquids of course. And unlike many public spaces, there seemed to be plenty of restrooms!

I haven't been to events at the Olympic Park, but in some ways, what I'm doing is even better. London has carefully chosen the venues for events, to make use of the sites it already has — so you have soccer at , archery at , and of course, tennis at Wimbledon.

London is on show, perhaps nowhere better than the beach volleyball arena constructed at Horse Guards Parade, normally home for the pomp and pageantry of royal ceremonies.

Only in London will you hear the words "serving from the end" in a beach volleyball match. That alone, seems somehow right. 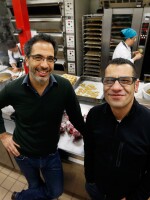