Florida Sen. Marco Rubio says America will have a different view of Mitt Romney by the time he accepts the Republican nomination for president.

Rubio will introduce Romney on Thursday, the final night of the Republican National Convention. He may have provided a preview of his speech to a gathering of Florida delegates Tuesday.

"Mitt Romney is a special human being," Rubio said. "You look at the way Mitt Romney has lived his life as a father, as a husband, as a grandfather, as a leader in his church and his community. I mean, he is a role model for what all of us hope our kids will grow up to be."

Polls show voters find President Obama more likable than Romney. But Rubio told a gathering of Florida delegates that those poll numbers will begin to change after this week.

"I think on Thursday night it will be clear to the American people not just that he's a special person, but that he offers a very different view of the future than the current president does."

The son of Cuban immigrants, Rubio is a rising star in the Republican Party.

His growing national profile is one reason protesters ambushed his speech Tuesday.

At least eight people were removed from the Innisbrook Resort in Palm Harbor, where the Florida Republican National Convention delegation is staying. A Pinellas County sheriff's deputy said the protesters were only being warned for trespassing, but would be arrested if they returned.

"We the working class demand the GOP stop whoring themselves out to the big-money interests ... and trying to squeeze every last dime out of the working class," shouted a man who would only identify himself as "John."

Rubio just rolled with the punches.

"Well, I guess he's not happy with the hotel assignment," Rubio quipped, referencing the distance the Florida delegation is staying from downtown Tampa. "Did he eat the food?"

Rubio still managed to fire up the Florida delegation, telling them the country is "one election away from a new beginning."

And if Romney can't win this November, many Republicans believe it's Rubio who can be part of that new beginning in 2016.

John O'Connor is the Tampa-based reporter for StateImpact Florida , a reporting project of local media and NPR. 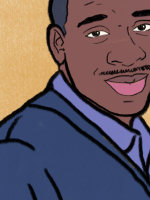