You can believe this latest poll result if you'd like. Or not.

A survey released Tuesday that was conducted by Public Policy Polling asked people if they thought pollsters were rigging their results to show President Obama leading Mitt Romney (h/t Josh Voorhees at The Slatest).

The poll found respondents virtually split, with 42 percent saying "yes" and 40 percent saying "no." Eighteen percent weren't sure. The poll was conducted for the Daily Kos, the liberal blog, and the SEIU, the service workers union.

Not surprisingly, given how polarized the national psyche is, how one responded to this question had almost everything to do with one's political party identification.

Asked if there was any partisan funny business in the polls, Democrats said "no" 65 percent of the time, versus 14 percent who said "yes."

Flip that and you just about had the Republican view, where 71 percent said "yes," 13 percent "no."

Thus, a question on whether pollsters are showing a partisan bias reveals the partisan bias of the respondents. It's just more proof of what we already knew. Republicans and Democrats represent two parties divided by a common Constitution.

There's been much written in recent weeks about the possibility of a Democratic bias in polls that show the president ahead of Romney. One of the best responses to the charge of such a bias, compelling because of its logic, is that it would be counterproductive for pollsters to misstate public sentiment since pollsters are only as good as their track record. (See the end of this CBSNews.com piece.)

As good as Gallup is, people still haven't forgotten its infamous 1948 poll that had Thomas Dewey beating President Harry Truman. (It was the Chicago Tribune, my old employer, that ran the "Dewey Beats Truman" headline. Even into the 21st century, a lot of people in the Tribune newsroom who weren't even born when that giant fail happened still wince when reminded of it.)

Erick Erickson, the conservative blogger whom no one would mistake for someone in the tank for Obama, made the same point about reputable pollsters having their names to uphold.

And just FYI, NPR characterizes PPP, the group behind the "do you believe the polls" survey, as Democratic-leaning. 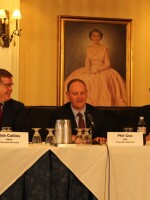