What is Nordic cool?

Right now, it's a massive festival at the Kennedy Center in Washington, D.C., with artists and designers displaying art and culture from their very top sliver of the globe.

The festival arrives at what seems like just the right moment for Americans.

From the Danish modern furniture of the 1950s to the omnipresence of Ikea, Americans have long been attracted to the austere design of Nordic countries.

We shop at H&M and we've read Stieg Larsson's The Girl with the Dragon Tattoo. One of The New York Times' most emailed articles this week also fits the northern trend. From its Oslo Journal, " Bark Up or Down? Firewood Splits Norwegians" reviews a 12-hour Norwegian television show devoted to building a fire.

"Nordic cool, it's also a little about oddness," says Jukka Savolainen, who is hosting the design portion of the festival.

When he talks about oddness he points to a large piece of lava rock in the shape of a ball.

"I think it looks like a garden gnome," Savolainen says.

The only outward similarity this piece, by Icelandic artist Tinna Gunnarsdottir, has to the traditional stocking-capped gnome is that this gnome, presumably, belongs in a garden.

"Why can't the garden gnome be something that is actually quite beautiful rather than funny-looking elves? When you think about the gnome as somebody kind of respecting nature, as someone kind of protecting their area, what is actually better than a natural element?" Savolainen says.

He says he thinks the Nordic appeal is simple.

"We are living in the virtual world and in the real world at the same time. People need simplicity," he says, "and the Nordic way of life is maybe a little bit simpler."

One example is the use of plywood in Nordic design and architecture.

"Emmanuel Nobel, Alfred Nobel's father, he was an inventor, architect and engineer, and he figured out a new way of making plywood," Jenni Olsulsen, an architect with the design firm Snohetta, says.

Snohetta designed Oslo's opera house, the new pedestrian-friendly Times Square and Sup-Plywood, a floor-to-ceiling pile of molded plywood on display in the Kennedy Center's Hall of Nations. The piece looks like its been dropped from above; one part stands up on its side, while the other flops on top of itself.

Olsulsen says viewers described the work as both a roll of film and a ski jump. She says it's about her society, like the pieces of plywood, working together.

"We try to really be as equal as possible and the way we work in team[s]. We're not so much survival of the fittest. We're more like we have to take care of each other," she says. "If we can bring something over to you and you can learn something of the way we are thinking, I think that would be really good."

Though, I'm still not sure it's going to help me understand a TV show about a burning fire.

The exhibit runs through March 17. 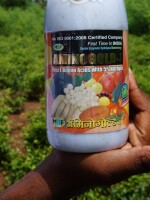