The Courage To Cross An Ocean, Explored In 'TransAtlantic'

In 1845, Frederick Douglass sailed to Ireland on a speaking tour to raise money for the abolitionist cause back home. About 75 years later, two airmen, Jack Alcock and Teddy Brown, performed the first nonstop trans-Atlantic flight, flying 16 hours from Newfoundland to land in an Irish bog. And 79 years after that, George J. Mitchell, the former senator from Maine, repeatedly crisscrossed the ocean — New York, Belfast, New York, Belfast — to steer the Northern Ireland peace process on behalf of President Clinton.

All three events are part of the historical record but don't have much in common otherwise — a continent, an island, an ocean. Then along comes Colum McCann, who tosses them into a book, adds a bunch of fiction, and suddenly Douglass, Mitchell, Alcock and Brown are flesh of the same body, telling us a story.

McCann is a master of the braided novel, where past and present intertwine with multiple protagonists. His previous book, Let the Great World Spin, won the National Book Award in 2009 after making New York City come alive through two events: the real-life accomplishments of Philippe Petit, who famously walked across a tightrope strung between the Twin Towers' rooftops, and a fictional trial of a prostitute.

TransAtlanticoperates with less design, more instinct. It's a book in seven chapters. The first three are based on real history: McCann vibrantly re-creates the Atlantic crossings of the pilots, abolitionist and senator — each man, in his business, attempting to defy impossible odds.

The book's next four chapters concern a fictional character, Lily Duggan. She's a young servant Douglass encounters during his visit. As a result of that meeting, Duggan immigrates to 19th century America, and we follow her adventures as well as the lives of subsequent generations in her family, who gradually make their way back to Ireland.

Unfortunately, the chapters themselves vary in substance. McCann makes the pilots' flight a gripping adventure. Douglass' inner struggles, as he encounters Ireland's famine victims, are deep and clear. McCann writes, "The poor were so thin and white, they were almost lunar." Whereas Mitchell's tos and fros read a bit like "The Dirge of the First-Class Business Traveler."

Similarly, Lily Duggan's attempts to survive in America are layered with turmoil and significance, but her ancestors' lives less so, despite their own helpings of joy and despair.

But while the stakes swing, McCann never lets go of the reader's attention. His sentences are simply too surprising, his observations too astute. I probably won't be able to reread my copy of the book, I've underlined it so much. About some plants in Belfast, he writes: "A city flower. A climber. Yellow with a small red center. Every bloom with its own little violence."

Books with braided narratives rarely tie their strands together with Eagle Scout-level wizardry. But the proper metaphor for TransAtlantic isn't a knot; it's water. By the end, you realize the chapters have operated like a set of waves, rolling and rebuilding, crashing into one another — and, like waves, ultimately returning to a single source. In this case, that source is the struggle required of a person to cross a wide ocean, whether that ocean is metaphorical or not.

Rosecrans Baldwin's latest book,Paris I Love You but You're Bringing Me Down, c omes out in paperback next month. 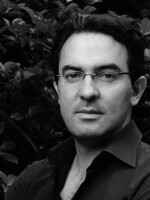