When you fall in love with science, ordinary, everyday stuff can suddenly seem extraordinary. That's how NPR blog or an astrophysicist Adam Frank sees it. So look around your house: the mail, the kids' toys, the mess on your desk, the constant daily chaos. Adam Frank says it's all just the universe having its way with your life.

ADAM FRANK, BYLINE: Listen, it's OK. You're not alone. We're all struggling, and we're all doomed to fail. You see, it's not just us. It's a law of physics. The hard truth is that the universe itself is dead-set against our long-term efforts to bring order to the chaos in our lives. That's because the universe loves chaos.

Think about your desk. You tidy it up. It slides into a mess. Tidy it up again, and still, two weeks later, the mess is back. That's because the deepest of deep cosmic principles is playing itself out right there in the midst of your pens, paper clips and paperwork. All those unruly piles of bills you need to pay, all those unfiled insurance forms falling on the floor, all those birthday cards you meant to send like, you know, the one for Aunt Sophie you bought four months ago - they are chaos. They are disorder. And for physicists, that disorder has a name: entropy.

Scientists first uncovered the laws of entropy back in the 1800s. Trying to squeeze the maximum efficiency from their shiny, new steam engines, they discovered a radical and somewhat depressing new cosmic principle. Taken as a whole, they found, the universe always moves from order to disorder, from low entropy to higher entropy. So while you might be able to reduce chaos in one small location like your desk, the very work you do creates more mess for the rest of the universe.

Think about what happens when you finally give up on sending Aunt Sophie her birthday card and toss it out. Even if you recycle it, it goes back into the universe, and the universe's total disorder goes up. Now think about your body's cells. The moment-to-moment effort of doing their work, purging your body of waste and maintaining its functions, that's life creating an astonishing island of order in the midst of chaos. But it can't last. The cosmic demand for increasing entropy is why, in time, those cells have to cash in their chips. This universal law of entropy increases why our bodies and our lives have to, you know, end.

But the news is not all bad. Yes, your efforts to tidy up that desk are doomed to a kind of ultimate failure. But what you can see now is the very act of trying is what defines being alive. Even more, it's that act of trying that makes life - your life, in particular - a cosmic victory. Life, you see, is the triumph of order over chaos. Life is order hammered out if only for a time. And with that effort, something new, something wonderful appears in the universe: creativity.

We and all of life are always changing, always evolving, always experiencing one gloriously unfolding moment to the next. By beating back the cosmic tide of disorder, you can write songs of praise. You can bake loaves of bread for the ones you love. You can make the light of meaning rise from the dark oceans of chaos that surround us.

Sure. Life may not last forever, but while it does, it's surely worth the effort. So what the heck? Go clean that desk. I like to imagine that even the universe itself is grateful.

SIEGEL: Adam Frank teaches physics at the University of Rochester, and he blogs for us at npr.org. His most recent book is called "About Time: Cosmology and Culture at the Twilight of the Big Bang." 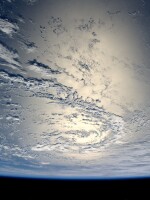 Adam Frank
Adam Frank was a contributor to the NPR blog 13.7: Cosmos & Culture. A professor at the University of Rochester, Frank is a theoretical/computational astrophysicist and currently heads a research group developing supercomputer code to study the formation and death of stars. Frank's research has also explored the evolution of newly born planets and the structure of clouds in the interstellar medium. Recently, he has begun work in the fields of astrobiology and network theory/data science. Frank also holds a joint appointment at the Laboratory for Laser Energetics, a Department of Energy fusion lab.
See stories by Adam Frank
Latest Stories
Support news that matters in Kansas City
KCUR serves the Kansas City region with breaking news and powerful storytelling.
Your donation helps make non-profit journalism available for everyone.
Donate Now